Shares of DCT Industrial Trust (DCT) were up by about 12% as of noon EDT on news that the company would be acquired by fellow real estate investment trust Prologis Inc. (PLD -2.64%). The stock-for-stock transaction values DCT Industrial Trust at approximately $8.4 billion.

Terms of the transaction call for DCT Industrial shareholders to receive 1.02 shares of Prologis for each DCT share they own. After closing, Prologis shareholders will own approximately 85% of the combined company, with DCT's shareholders owning the balance.

Prologis highlighted the companies' geographic mix as rationale for the transaction, noting that the industrial REITs have 100% overlap in the markets in which they operate. Prologis intends to sell about $550 million, or 7%, of the assets it acquires in the deal. 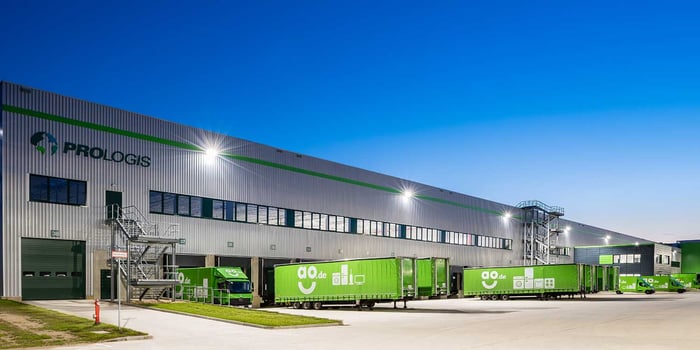 The combined company would generate approximately 23% of its net operating income in Southern California. New York and New Jersey, and San Francisco round out its top three markets, each generating about 10% of pro forma net operating income, according to a presentation.

Prologis and DCT share many of the same tenants, but the deal also brings Prologis about 500 new customers. Amazon will remain the combined company's largest exposure, at 3.1% of pro forma rent.

Prologis expects that the combination will be accretive to core funds from operation (core FFO), adding about $0.06 to $0.08 to annual core FFO per share. The company believes that it can generate $80 million in synergies immediately, plus $40 million of additional synergies over time from expanded revenue and value creation. DCT Industrial Trust has about 195 acres of land in pre-development, with 215 acres of land under contract or option.

At its current price of $64.80 per Prologis share, the announced transaction values DCT Industrial Trust shares at $66.10 each. DCT Industrial shares are currently trading at a small (less than 1%) discount to that implied value, suggesting that Wall Street believes the transaction will close as anticipated in the third quarter.

John Mackey, CEO of Whole Foods Market, an Amazon subsidiary, is a member of The Motley Fool's board of directors. Jordan Wathen has no position in any of the stocks mentioned. The Motley Fool owns shares of and recommends Amazon. The Motley Fool has a disclosure policy.