Please ensure Javascript is enabled for purposes of website accessibility
Log In Help Join The Motley Fool
Free Article Join Over 1 Million Premium Members And Get More In-Depth Stock Guidance and Research
By Tyler Crowe - May 1, 2018 at 9:25AM

The company is already churning out loads of excess cash that could be put toward funding even more new projects.

At this point, I think it is bigger news when Enterprise Products Partners (EPD 1.65%) posts quarterly earnings that don't break records for profitability and operations. This past quarter was another in a long string of impressive earnings results that have made Enterprise one of the most reliable income investments for decades.

Even better, though, is that management noted a few things that should make next quarter and the rest of the year look even better. Let's sift through Enterprise's most recent earnings results to see what's in store for the pipeline giant.

The key to Enterprise's success over the years has been bringing a steady diet of projects live, year-in, year-out. Recently, though, it has brought a few very large projects live that are having an outsized impact on the bottom line. This past quarter, it was the start-up of a new petrochemical manufacturing division at its Mont Belvieu, Texas, petrochem complex. Those gains, and marginal gains for its natural gas liquids (NGL) and natural gas business, helped to offset some one-time charges in its crude oil segment. 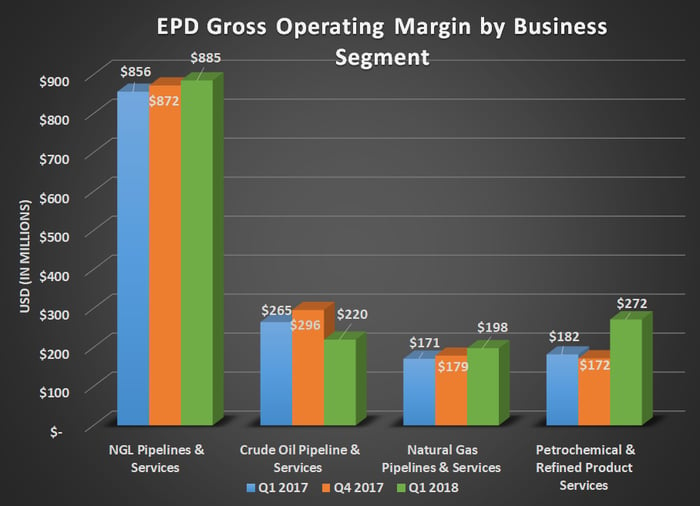 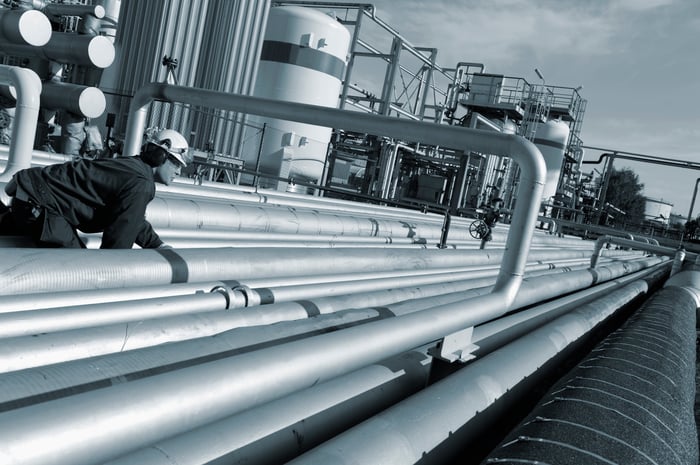 Enterprise is always evaluating new projects that can leverage its existing assets to generate greater value. One thing that has been in high demand lately has been the need to move crude oil from the Permian Basin to the Gulf Coast. One thing Enterprise was considering was repurposing an NGL pipe. According to CEO Jim Teague, though, it may get away with another, lower-cost option:

Our engineering and operating teams have exhibited their "best in class" execution in 2018. We currently expect the Midland-to-ECHO crude oil pipeline system will have approximately 575 MBPD of gross transportation capacity depending on the quality of crude oil shipped. This is over 25 percent, or approximately 125 MBPD, more than originally expected. Based on this performance, we will continue to evaluate whether or not we would still need to repurpose an NGL pipeline into crude oil service to meet the growing demand to transport barrels from Midland to Houston.

Teague also highlighted some of the projects that have recently become operational that will impact the bottom line next quarter.

We completed the commissioning of our PDH facility and began commercial service in April 2018. Finally, we began commissioning activities for our Orla I natural gas processing plant in the Permian Basin in April 2018. We expect our ninth NGL fractionator to begin operations later in the second quarter of 2018. With regard to business development, while we do not have any new projects to announce, we are seeing a noticeable pickup in discussions and negotiations, and expect to announce new organic-growth projects later this year.

(You can check out a transcript of the whole quarterly conference call here). 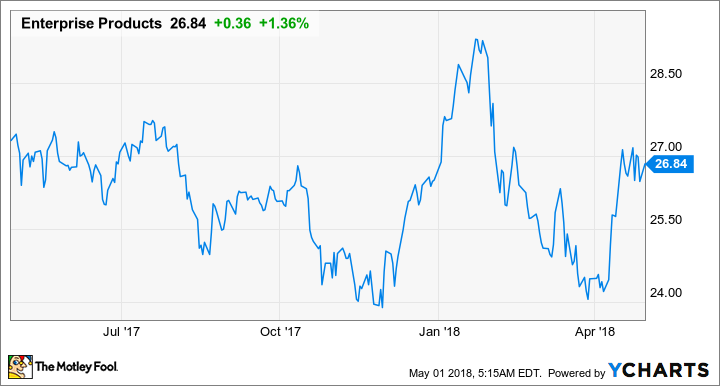 Late last year, Enterprise's management announced a plan to slow its rate of distribution growth to retain more cash for spending and not issue shares to pay for projects. It was assumed that excess cash would build, but I don't think anyone assumed it would happen this quickly. With three major petrochemical processing facilities going into service in the second quarter, we can expect that distribution coverage ratio and retained cash number to jump even further.

Management seemed to hint that we are going to see a slew of new project announcements in the next couple of quarters, and it wouldn't be at all surprising if management increases its capital spending guidance for the rest of the year. There are too many opportunities to grow its business right now, and the amount of cash it has at its disposal should make it relatively easy to add more projects to its capex plan.