Please ensure Javascript is enabled for purposes of website accessibility
Log In Help Join The Motley Fool
Free Article Join Over 1 Million Premium Members And Get More In-Depth Stock Guidance and Research
By Steve Symington – May 8, 2018 at 2:30PM

The RV dealer delivered mixed results and tempered expectations for its peak selling season. Here's what investors need to know.

Shares of Camping World Holdings Inc. (CWH 2.59%) were down 17.3% as of 3:00 p.m. EDT Tuesday after the RV dealer announced mixed first-quarter 2018 results and warned of a slow start to its peak selling season.

That's not to say Camping World's performance looked bad at first glance. Quarterly revenue increased 20.4% year over year, to $1.06 billion, including a 3.9% increase in same-store sales. On the bottom line, that translated to 16.5% growth in adjusted pro forma net income, to $36.9 million, and a 9.7% increase in adjusted earnings per share, to $0.41. However, most investors were looking for higher adjusted earnings of $0.42 per share on slightly lower revenue of $1.05 billion. 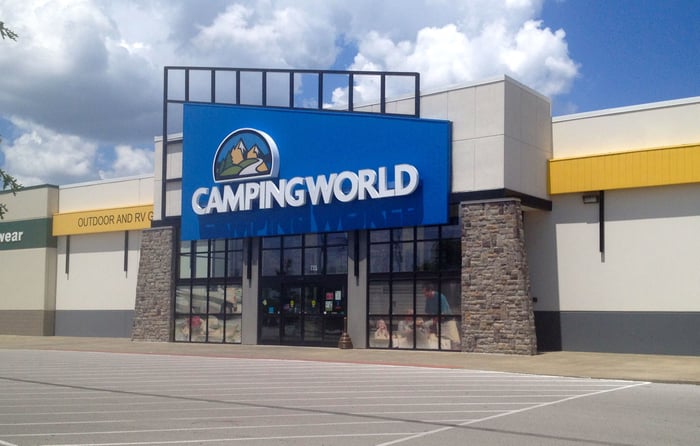 At the same time, he insisted the "backdrop across the RV industry remains strong" and that the company continues to expect a mid-single-digit increase in same-store sales for the full year of 2018.

During the subsequent conference call, Camping World reiterated its guidance for full-year 2018 revenue in the $4.8 billion to $5.0 billion range and for adjusted EBITDA of $431 million to $441 million. But considering consensus estimates already predicted Camping World's 2018 revenue would arrive near the high end of its current guidance range, it's obvious the market wanted more.

Coupled with Camping World's minor earnings shortfall (relative to expectations) in Q1 and its temporary weather-related sales headwinds, it's no surprise to see the stock falling in response.