Please ensure Javascript is enabled for purposes of website accessibility
Log In Help Join The Motley Fool
Free Article Join Over 1 Million Premium Members And Get More In-Depth Stock Guidance and Research
By Asit Sharma - May 17, 2018 at 1:30PM

During The Times' first-quarter 2018 earnings conference call on May 3, executives touched on several growth-related topics, and I've isolated three that are most relevant to investors, each beginning with an illustrative quote from CEO Mark Thompson. 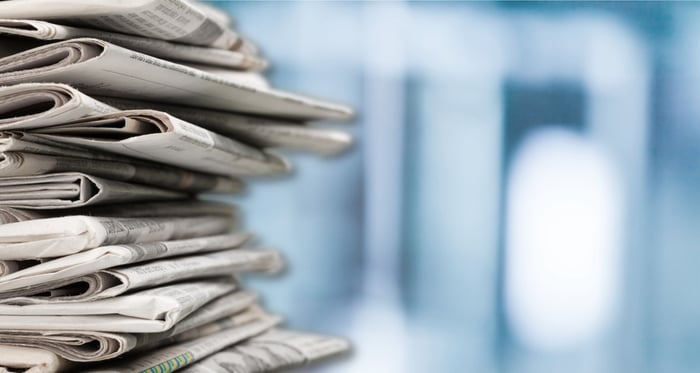 The wave of new customers is sticking around

"Retention of our core digital news product remains a very encouraging story. We continue to retain the post-election cohorts, some of whom are now well over a year into their subscriptions, at least as well as earlier cohorts." -- CEO Mark Thompson

These are "net" new subscriptions. That is, they're the total of new subscribers after accounting for those who have allowed their subscriptions to lapse. As I discussed last fall with my colleague Vincent Shen, the Trump Administration provided a subscriber cornucopia to the Times in the quarters initially following the 2016 U.S. presidential election.

Thus, the first quarter of 2018 is a critical gauge of the enthusiasm of this wave of new customers. One could expect interest to wane after more than a year since the election. Yet the continued growth in overall subscribers indicates that the newspaper is holding on to its 2016 and 2017 cohorts. This high retention of digital customers is allowing the paper to amplify its net additions at double-digit rates.

"In previous earnings calls, I've talked about innovation in areas like VR, AR and audio. This year, you will see us turn our attention to television. First up at the end of May is an independent Showtime documentary, where The Times newsroom and our coverage of the first year of the Trump Administration is the subject. And we have our own projects in the works, including a recently announced agreement with Anonymous Content that will help us accelerate moving Times journalism into film and TV." -- CEO Mark Thompson

Increasingly, Times executives see video as a natural extension of the newspaper's journalistic offerings. In the discussion above, Thompson also elaborated on the partnership with the production firm Anonymous Content: Its first project will be the creation of a feature film about the Harvey Weinstein sexual assault story, which the Times broke, and for which it recently won a Pulitzer Prize for journalism.

While a foray into television might seem like a risky, non-core leap for The Times, the company has been encouraged by the outsized success of its podcast, The Daily -- an unexpected hit. The Daily reflects an appetite for behind the scenes narratives of popular Times articles. It's what COO Meredith Levien recently called "the story behind the story."

Last week, the cable channel FX announced that it will feature a new 30-minute weekly show later this year in partnership with the Times, modeled after The Daily. It will be named, appropriately, The Weekly. Video-on-demand service Hulu will have streaming rights for the content.

The organization is capitalizing on the realization that a single piece of journalism can have many extensions and, consequently, more than one opportunity for revenue. As traditional media consumption habits splinter, stories can be refined or expanded through multiple channels. Television, podcasts, and streaming video content also allow the The New York Times to reinforce its brand of journalistic authority, and reach a global audience beyond its website and print newspaper.

"...[W]e are trying to drive the scale of the base. We certainly keep a close eye on total revenue at the model and its growth path. But we're not managing [average revenue per user] -- we're not yet." -- CEO Mark Thompson

During The New York Times' earnings call, several analysts asked management about average revenue per user (ARPU), as the company reported an increase in ARPU from the previous sequential quarter. Executives relayed three big-picture perspectives that investors should consider.

New CFO Roland Caputo implicitly cautioned against reading too much into the ARPU metric from quarter to quarter. Caputo pointed out that in periods when interest in the company's digital products surges, new subscriptions at promotional prices tend to have an initially dilutive effect to this metric. This effect disappears when subscribers renew their initial subscriptions at full price.

Levien argued that The New York Times is benefiting from a widening scale of customers, while simultaneously introducing new vertical revenue streams like the company's crosswords and cooking products. Levien implied that new product introduction and future pricing power are equally important to adding customers in order to improve ARPU.

For his part, Thompson relayed that the executive team isn't overly keyed in on growing ARPU. As he suggests in the quote above, revenue management is a process a company implements when growth is slowing. Thompson stated unequivocally that the Times' more important objectives are to expand the size of the overall business, and to gain new subscribers. Essentially, he clarified that management could live with a short-term decline in revenue on a per-customer basis, if it was in service of reaching the newspaper's overarching goals.