Please ensure Javascript is enabled for purposes of website accessibility
Log In Help Join The Motley Fool
Free Article Join Over 1 Million Premium Members And Get More In-Depth Stock Guidance and Research
By Maxx Chatsko - May 21, 2018 at 9:16AM

Some investors turn to owning gold when the economy stumbles. But this gold streaming stock is an even better buy.

A growing chorus of top Wall Street analysts, all-time great investors, and local barbers around the country are echoing a bearish sentiment about the American stock market. While the economy is humming along and stocks are at all-time highs, a brief look at historical averages suggests both might be overdue for a cool down. There may not be a hard rule on when either occurs, but the fact is that the stock market has only been more expensive relative to earnings twice in history: on Black Tuesday in 1929 and at the height of the dot-com bubble.

That's not exactly great historical company. That also explains why gold fever is spreading among investors again, as it inevitably does when economic conversations turn gloomy. I think it's better to buy and hold stocks for the long haul, but for those considering buying gold directly, I'd encourage a different strategy. That is, buying the best gold stock instead: streaming company Royal Gold (RGLD 1.39%).

If you aren't familiar with the company, then there are a few things you should know about Royal Gold. The most important is that it doesn't partake in the risky business of mining and extracting gold, which is subject to costly development and regulatory considerations. Instead, the business enters into agreements with miners to provide upfront cash payments in exchange for the right to purchase minimum quantities of precious metals for a certain duration of time.

Here's the important part: Royal Gold agrees to purchase precious metals at prices investors could only dream of -- sometimes representing just 30% of the spot price of gold or silver. That leaves considerable upside that's clearly reflected in the financial statements.

Consider that through the first nine months of its 2018 fiscal year, Royal Gold reported $342 million in revenue and adjusted operating income of $128 million. In other words, the business converted 37.5% of sales into operating profits. 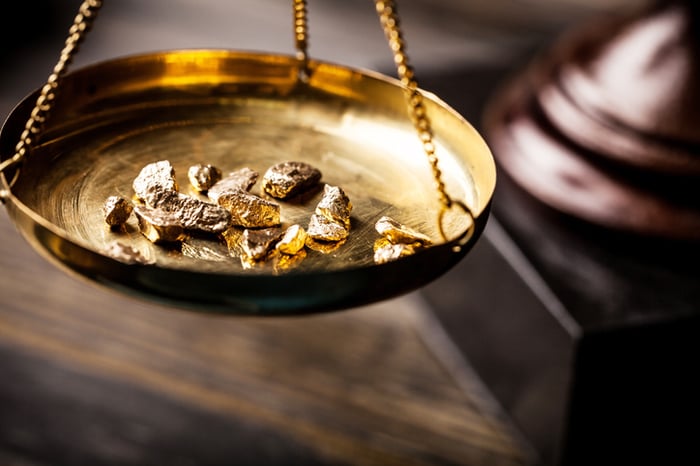 Well, it would have, if not for taking a non-cash impairment charge of $239 million ($185 million net of taxes) after Barrick Gold announced delays at its Pascua-Lama mine in South America. Royal Gold has a streaming interest in place for the mine, so the delay forced it to recalculate the net present value being carried on its balance sheet. While that shows that the company is still somewhat exposed to the risks inherent to the mining industry, the stock barely budged on the revelation. Why not?

Well, Royal Gold still boasted $2.5 billion in streaming and royalty assets on its balance sheet at the end of the fiscal third-quarter 2018 (ended in March). More important, the impairment didn't affect current operations, which continue to get stronger and more profitable.

The impairment charge left its mark on operating income and net income, but they're only losses on paper. Case in point: Through the first nine months of fiscal 2018, Royal Gold has turned an astounding 73.4% of revenue into operating cash flow.

An added benefit for gold investors to consider is that a healthy level of cash generation allowed the company to continue its aggressive repayment of debt. While the balance sheet is relatively clean, the majority of assets counted are in the form of long-term streaming and royalty agreements. Impairments aren't common, but considering the recent write-off, management is erring on the side of caution to further increase the financial health of the business. Investors aren't complaining.

Since the end of fiscal 2017, total liabilities have fallen 19.5%, or $151 million, with nearly all of the benefit from paying down long-term debt. An increase in cash and cash equivalents in the last three quarters resulted in a net debt improvement of $188 million.

Recessions are no match for this gold stock

It gets even better. Royal Gold has beaten the S&P 500 in total returns in almost every long-term comparison period, which is not something many gold stocks can brag about. In the last three years, the streaming company barely gets the edge at 38.6% to 36.6%. But in the last decade, the stock has put up total returns of 241%, compared to just 137% for the index.

That gap should widen in the near future considering multiple notable growth projects are coming on line at the end of the year. That's especially true if precious metals prices rise on economic fears. So rather than own gold directly, investors looking to adopt any hedging strategy involving precious metals should look to buy Royal Gold stock instead.