Please ensure Javascript is enabled for purposes of website accessibility
Log In Help Join The Motley Fool
Free Article Join Over 1 Million Premium Members And Get More In-Depth Stock Guidance and Research
By Jeremy Bowman – May 25, 2018 at 10:30AM

The consumer-goods giant is a popular stock with income and beginning investors, but there are several reasons to avoid it today.

Procter & Gamble (PG -2.75%) has long been an investor favorite. According to the conventional wisdom, the company has a lot going for it. P&G is nearly 200 years old. It's an S&P 500 Dividend Aristocrat, having raised its dividend every year for 62 years in a row, and the company has 22 billion-dollar brands, household names including Tide, Bounty, and Crest.

While Procter & Gamble has historically been a winner on the stock market as it has steadily grown over the years and paid a reliable dividend, it's struggled more recently. In fact, the household-products giant has significantly underperformed the S&P 500 during any meaningful time interval in the last 10 years. Over the last decade, for instance, the stock has gained just 12% while the broad market has nearly doubled. 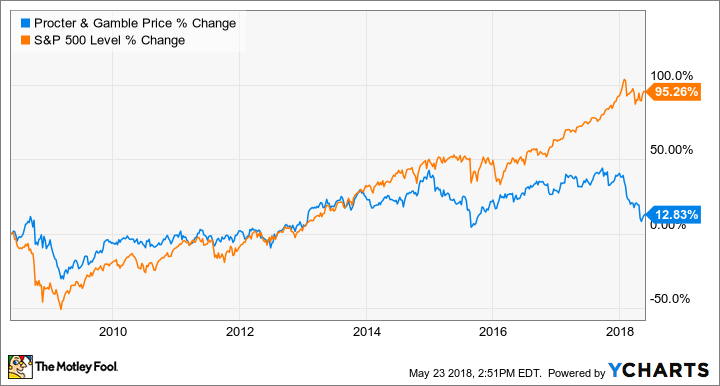 As the chart shows, that disparity has become more pronounced over the last few years as P&G is one of the few megacap stocks that is down over the last five years.

Nonetheless, the stock still has its supporters: Out of the 22 analysts covering it, only two rate it below a hold, and 10 of those analysts consider it a buy or even a strong buy, with the average one giving it a price target of $81.74, 10% above its current trading price.

You may already be familiar with some of the popular bull arguments for Procter & Gamble. Below, I'll review them and explore why they are bad reasons to invest in the stock.

P&G corporate and investors love to tout the company's portfolio of brands, which is unmatched by any consumer packaged goods (CPG) company except for Coca-Cola. However, growth is king in investing, and even brands that generate billions of dollars in revenue annually can become albatrosses if they can't deliver sales growth. For example, Gillette, the razor brand that P&G acquired in 2005 for $57 billion, has been a leader in razors for more than a century, but the brand has now become threatened by online upstarts like Dollar Shave Club, which was acquired by rival Unilever, and Harry's. As a result, Gillette has been forced to lower prices and has lost market share in recent years. In P&G's grooming division, which is led by Gillette, net sales have fallen 1% through the first three quarters of the current fiscal year, and operating profits are down 13%.

The rise of e-commerce is also shaking up the company's traditional strength in supermarkets and drugstores where it commands valuable shelf space. Smaller brands have become more popular with consumers, who are searching for unique and authentic brands, and online retailers like Amazon can push their own private-label products, rather than branded ones, if they choose.

Procter & Gamble's dividend is often cited as a reason to invest in the company, and indeed, few of its peers can claim to have paid rising dividends for 62 years. The Pampers maker also offers a strong dividend yield at 3.9%. However, its growth has been lacking in recent years. Since 2015, its highest dividend increase was 4%, and in 2016 it was as low as 1%. Dividend growth has been slow as earnings growth has essentially stalled during that time, and considering its payout ratio, or the percentage of its profits that go to dividends, is at 72%, the company only has so much room to raise its dividend without growing its profits in line.

Furthermore, the 3.9% yield may be appealing to income investors, but with the Federal Reserve expected to continue raising interest rates, even 10-year treasuries will likely offer a better yield soon. Even for income investors, there are simply better options out there.

As a consumer-staples company and a Dividend Aristocrat, Procter & Gamble is a classic defensive stock, or a stock that should outperform the market in a recessionary climate. After all, consumers still need products like detergent even in tough times, and the company's dividend makes it an appealing investment when stocks are falling. However, that perceived safety has come at a steep price as the chart at the top of the article shows, as investors have missed out on nearly all of the market's growth over the last 10 years.

While it's true that P&G is less risky than many other stocks, again there are simply better options for investors concerned about wealth preservation or income. Berkshire Hathaway (BRK.A 0.59%) (BRK.B 0.43%), for example, is a classic example of a well-diversified company that has successfully weathered many economic downturns. Elsewhere, utility stock Consolidated Edison (ED -2.58%) has risen alongside the market over the last 10 years and has offered a better yield than P&G most of that time.

CPG companies like General Mills and Campbell Soup have struggled broadly in recent years as consumer tastes and shopping habits have changed, and Procter & Gamble, though not a food company, isn't much different. The stock is likely to continue to underperform as consumer trends favoring e-commerce and smaller brands are unlikely to change -- and they undermine the company's historical strengths.

John Mackey, CEO of Whole Foods Market, an Amazon subsidiary, is a member of The Motley Fool’s board of directors. Jeremy Bowman has no position in any of the stocks mentioned. The Motley Fool owns shares of and recommends Amazon and Berkshire Hathaway (B shares). The Motley Fool has a disclosure policy.