Please ensure Javascript is enabled for purposes of website accessibility
Log In Help Join The Motley Fool
Free Article Join Over 1 Million Premium Members And Get More In-Depth Stock Guidance and Research
By Adam Levine-Weinberg - May 25, 2018 at 8:41AM

The retailer maintained its trajectory of strong long-term sales and earnings growth last quarter. Nevertheless, the stock pulled back in after-hours trading on Thursday -- creating a nice buying opportunity.

Ross Stores stock fell 5% in after-hours trading despite the solid earnings report, as investors were disappointed in the company's guidance. However, like TJX, Ross Stores routinely offers very conservative forecasts. As a result, guidance-related stock pullbacks like this one usually make great buying opportunities.

On Tuesday, TJX announced that sales surged 11.6% last quarter on a 3% comparable store sales increase. This comfortably outpaced the company's forecast that comp sales would rise 1% to 2%. Furthermore, earnings per share surged 38% to $1.13, up from $0.82 a year earlier and well ahead of expectations. That included a sizable benefit from tax reform as well as strong organic EPS growth.

Ross Stores' total sales rose 8.5% last quarter, boosted by new store openings. Like many other apparel-focused retailers, Ross Stores said that its results would have been even better but for unfavorable weather trends at the beginning of the spring selling season.

While Ross Stores delivered strong results last quarter despite the significant negative impact of poor weather, management warned that the second quarter could be tougher. As usual, Ross Stores is projecting a 1% to 2% comp sales increase for the upcoming quarter. However, it expects EPS growth to slow considerably, due in part to a $0.02 headwind from the timing of expenses that were shifted from the first quarter to the second quarter.

Disappointing guidance is nothing new for Ross Stores investors. However, management has a long-standing habit of underpromising and overdelivering on sales and earnings.

Indeed, for each of its past three fiscal years, Ross Stores has achieved a 4% comp sales increase, despite beginning each year with a forecast for 1% to 2% comp sales growth. Additionally, EPS has routinely exceeded the high end of the company's guidance range by 4% to 6%. Thus, it's not surprising that Ross Stores stock has more than doubled since mid-2014. 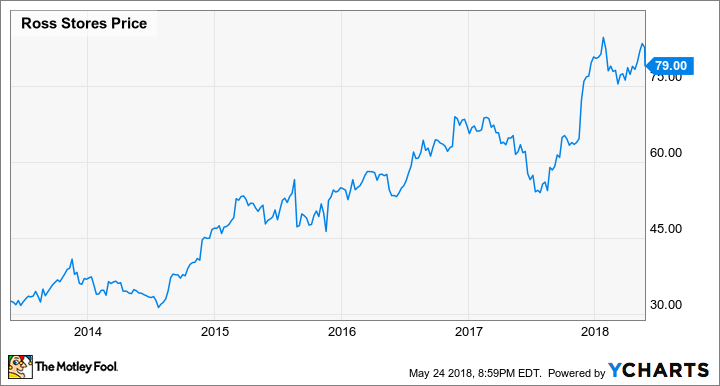 Even excluding the $0.02 benefit from expenses shifting into the second quarter, Ross Stores comfortably beat its sales and EPS guidance last quarter. If weather trends are more favorable during the remainder of the year, the company should be able to post even bigger sales and earnings beats going forward.

Thus, investors shouldn't get too hung up on Ross Stores' guidance, even if it seems to imply a sharp slowdown in earnings growth. The reality will likely be far better than the forecast. That makes any pullback in the stock a potential buying opportunity for long-term investors.