Shares of Foot Locker Inc. (NYSE:FL) were up 13.5% as of 11:00 a.m. EDT Friday after the footwear retailer announced better-than-expected fiscal first-quarter 2018 results.

That's not to say Foot Locker's performance looked encouraging at first glance. Quarterly revenue increased 1.2% year over year to $2.025 billion, as a 2.8% decline in comparable-store sales was more than offset by favorable foreign exchange rates. On the bottom line, that translated to net income of $165 million, or $1.38 per share, compared to $180 million, or $1.36 per share in the same year-ago period. 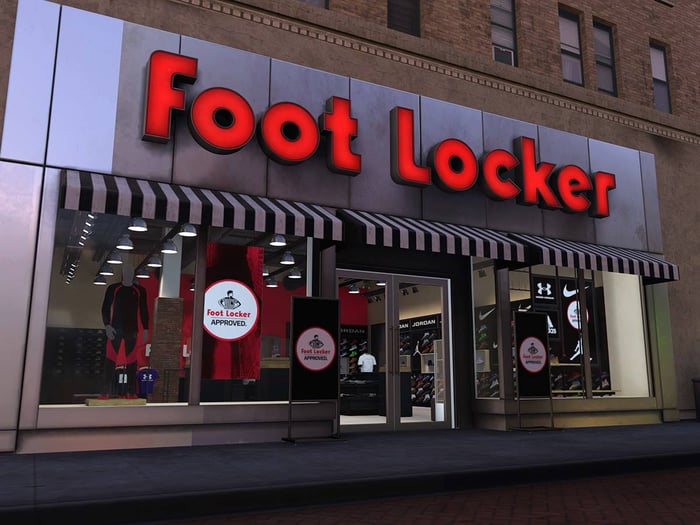 "The flow of premium product continues to improve, with increasing breadth and depth in the most sought after styles from our key vendors," said Foot Locker Chairman and CEO Richard Johnson. "This led to first quarter results which were above our expectations."

Johnson added that, thanks to strong vendor partnerships and Foot Locker's "central position in youth culture," they continue to believe that comparable-store sales will turn positive later this fiscal year.

More specifically, during the subsequent conference call, CFO Lauren Peters reiterated their expectations for comparable sales to be "flat to up slightly" on a year-over-year basis in the current fiscal second quarter, followed by low-single-digit growth in both the fiscal third and fourth quarters, "strengthening within that low-single-digit range as we progress throughout the year."

Furthermore, for the full fiscal year, Foot Locker anticipates flat to low-single-digit comps growth and "solid" double-digit growth in adjusted earnings per share over the $3.99 it earned in 2017.

In the end, Foot Locker certainly has some work to do as it strives to return to sustained, profitable growth. But this report was a big step in the right direction, and it's no surprise to see the stock rallying in response.