Please ensure Javascript is enabled for purposes of website accessibility
Log In Help Join The Motley Fool
Free Article Join Over 1 Million Premium Members And Get More In-Depth Stock Guidance and Research
By Demitri Kalogeropoulos – May 28, 2018 at 10:11AM

Here's what investors should watch for in the beauty retailer's upcoming earnings report.

Its shares have soared over the last decade as Ulta Beauty (ULTA 3.83%) built its store base up to over 1,000 locations from less than 300 in 2008. But the country's biggest beauty retailer now has investors concerned that its high-growth phase might be stalling.

Sales gains have slowed in each of the last three quarters, after all, and profitability is expected to drop for the second straight year in 2018.

In its earnings report on Thursday, May 31, Ulta might clear up a few investor worries about those top- and bottom-line challenges. Let's take a closer look. 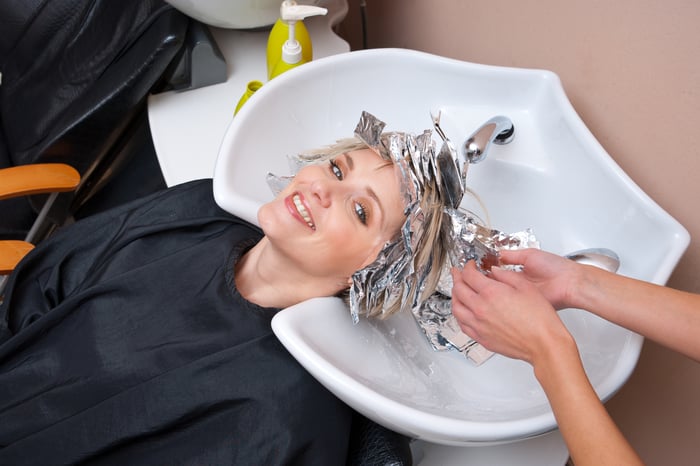 Ulta Beauty is growing at a market-thumping pace, just not as quickly as it has in recent years. Comparable-store sales (comps), or sales at existing locations, slowed to an 11% pace last year after having jumped 16% in 2016.

That increase edged past management's guidance, but with an important caveat. Specifically, a surprisingly large portion of the growth came from its e-commerce sales channel and not from increased demand at its physical locations. In fact, customer traffic growth was 7% in 2017, down from an 11% spike the prior year. Digital sales accounted for 3.9 percentage points of Ulta's comps growth last year, up from 2.4 percentage points the prior year.

While its e-commerce success is good news for the business, investors will be looking for signs that its physical store base is still attracting more shoppers. Continued robust customer traffic gains are the best way to support management's long-term goal of establishing 1,700 stores in the market by adding roughly 100 to Ulta's footprint each year.

Until a few months ago, CEO Mary Dillon and her team had planned to steadily boost the business's profit margin toward 15% of sales. Two trends combined to dash those hopes, though. First, demand growth slowed in its core makeup industry niche, which forced retailers and manufacturers to increase their promotional stance. Second, those booming e-commerce sales don't carry as high a profit margin as in-store sales do. Thus, as the business shifts more quickly toward the digital channel, Ulta's profit picture has taken a turn lower. 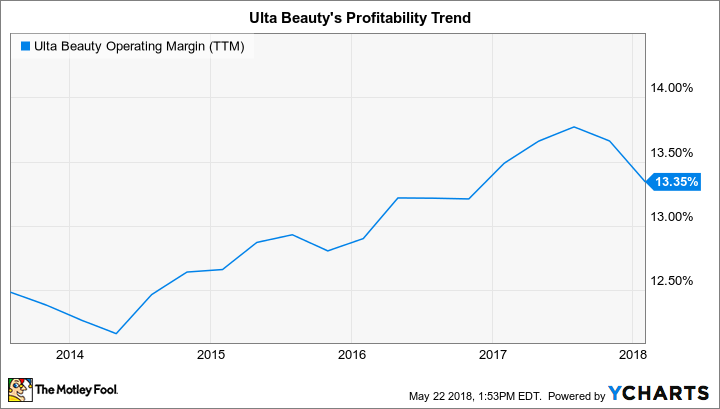 Their initial 2018 forecast calls for operating margin to drop to just below 13% of sales this year from 13.3% in 2017. But management isn't worried about that step down since it mainly reflects investments that they're making into building a stronger business. Ulta is paying out higher salaries, for example, while pouring resources into optimizing its supply chain and boosting data capabilities so that it can better market toward its loyalty members.

Still, investors will get a better idea about Ulta's earnings power by following its profitability over the coming quarters. If gross and operating profit margins continued dipping just slightly, in the context of continued market-share gains, then that would be a win for the business given the tough selling environment.

Ulta has had a habit of blowing away its growth targets in recent years, but the weaker industry makes that less likely in 2018. As it stands now, Dillon and her team expect comps to increase by between 6% and 8% this year as e-commerce shoots up toward 15% of the broader business. Tax cuts should help earnings continue expanding at a 20% or better rate even as operating profitability dips toward 13%, and the addition of about 100 new stores is likely to push overall revenue up by around 15%. Any of those targets might be adjusted on Thursday as executives adapt to the latest beauty retailing demand trends.