Amazon (NASDAQ:AMZN) has built its e-commerce business model around offering Prime members unlimited free, two-day shipping on more than 100 million items. The program's popularity has forced retail rivals including Walmart (NYSE:WMT) and Target (NYSE:TGT) to attempt to match or outdo it with same-day delivery services of their own.

Clearly, a certain group of shoppers now considers two-day shipping to be the minimum standard -- but that may not stay true forever. A new survey of 5,000 shoppers ages 14 to 24 conducted by Fluent Commerce suggests that younger shoppers are willing to wait longer for their deliveries. And while you would think younger means more digitally oriented, a surprising number of them still plan to shop in stores.

"The data derived from this survey resulted in the idea that the next generation of shoppers are an anomaly when it comes to the scale of convenience," wrote the authors of the report. "Meaning that retailers (in-store and online) should pay attention to the idea that Amazon's two-day shipping theory may mean less to emerging generations than it does to current shoppers." 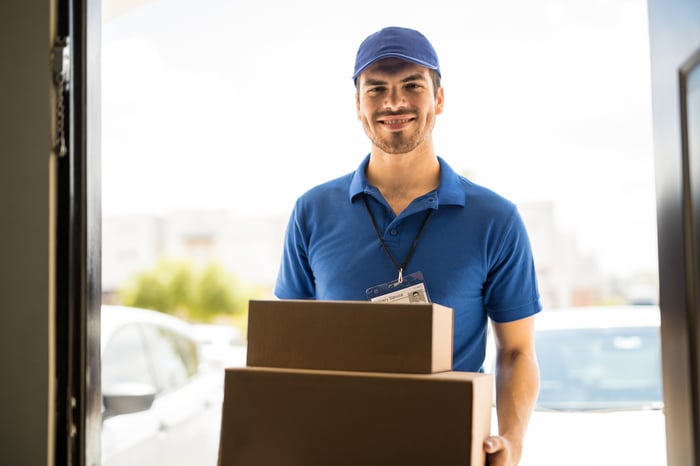 These younger shoppers were also pretty evenly split in terms of their preferences for shopping online versus in a store. Just about half (47.03%) answered said they liked both equally, while exactly the same percentages (26.48%) picked in-store and online.

These 14- to 24-year-olds did bring a clear set of expectations to the table when it came to stores and shipping. About two-thirds (66%) said they expect brick-and-mortar retailers to offer same-day pickup for online orders. Nearly all (90%) respondents agreed that free shipping influences their decisions when it comes to making purchases.

And while, as noted above, the vast majority of respondents were in principle willing to be patient when it came to deliveries, when asked to name their chief frustration with shipping, just over 40% said it was when packages fail to arrive on time, while 22.37% pointed to tracking websites providing inaccurate information about a delivery's status. By comparison, just 19.18% cited their merchandise getting damaged in transit as their most-frustrating shipping issue, while a similar percentage (18.26%) said it was packages being delivered to the wrong address.

Is all this patience temporary?

While younger shoppers may think they're willing to wait for delivery because they can pop by a store if they need something right away, their opinions may shift in a few years, when they have careers, families, and other concerns taking up their time. In general, older consumers have more responsibilities and less time to spare then the average teenager, college student, or recent grad.

On the one hand, this data shows that brick-and-mortar remains a key piece of the retail puzzle, and it's a reminder that, in some cases, rapid delivery is less of a concern for shoppers than Amazon, Walmart and Target may think. On the other, it's hard to believe that young people will actually be willing to wait five or even ten days to get the sort of mundane household items older shoppers commonly order via e-commerce sites.

Once a customer service standard is set, it's very hard -- if not impossible -- to get consumers to go backward. People might say they'd willingly wait longer or visit stores more often if the upside is lower prices, but it will be interesting to see how firmly this age group holds onto those opinions longer term.