Investors seem pleased with Apple's (NASDAQ:AAPL) latest updates to its software announced Monday morning during the tech giant's annual Worldwide Developers Conference (WWDC). The stock is up more than a percent and a half over the last two trading days. The event included announcements of a range of notable updates, including Dark Mode for Mac, improved notifications, group FaceTime calling, Memoji's, a new augmented-reality measuring tape app by Apple, and more.

But one feature Apple announced that's worth some extra attention is the company's overhauled Mac App Store. Though iPhone still accounts for the bulk of Apple's business, representing 62% of trailing-12-month revenue, the tech giant's services business has arguably become its most important catalyst. And Apple's App Store is absolutely integral to its services business. An all-new Mac App Store, therefore, may help Apple replicate some of the momentum the company has seen with its recently redesigned mobile app store, catalyzing growth in app stores on Apple's native desktop app store. 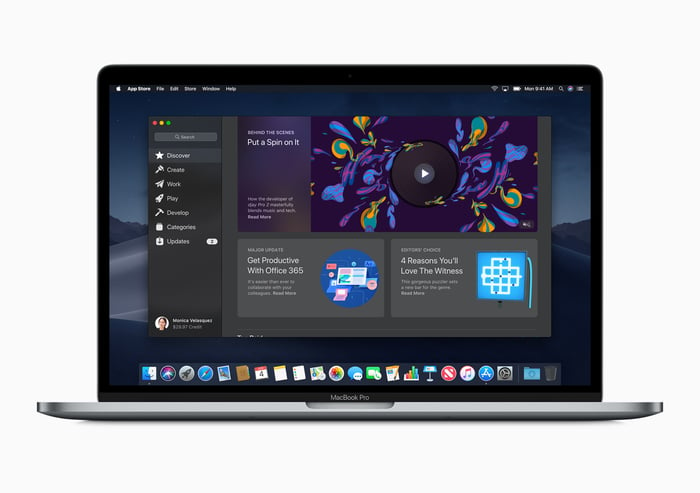 Launching later this fall, Apple calls its overhauled Mac App store "all-new" -- and it's a fair designation given the store's fresh new look, improved navigation, and the inclusion of apps from major players like Microsoft and Adobe.

Like the successful iOS App Store that redesigned last year, the new Mac App Store features a Discover tab where users can find "compelling stories, in-depth interviews, helpful tips, collections of must-have apps and more," Apple explained in a press release about the new App Store. In addition, "Users can also explore new Create, Work, Play and Develop tabs to find the perfect app for a specific project or purpose -- from music, video and photography apps to business utilities and games," Apple said.

Getting developers on board

Just seven years old, the Mac App Store has morphed into the largest catalog of Mac apps, according to Apple's senior vice president of worldwide marketing Philip Schiller. However, Apple has failed to generate the same level of commitment from developers to its app store on desktop as it has on its app store on mobile. Many popular apps, for instance, are only available for download directly to customers. Microsoft's Office 365 applications and Spotify's streaming music player are examples of two apps that are available on the iOS app store but not the Mac App Store.

By refreshing its Mac App Store, Apple likely hopes it can attract more desktop applications as the default location for users to download them. To this end, Apple announced that Microsoft will be launching its Office 365 productivity suite and Adobe will launch Lightroom CC on the new Mac App Store. Of course, these are only two examples of major apps coming to the redesigned Mac App Store, but it's an important start for the new Mac App Store.

A catalyst for Apple's services business

If Apple can get some of its momentum on its iOS App Store to carry over to desktop, the new Mac App Store could evolve into a meaningful catalyst for Apple's services business.

Apple has been seeing record sales on its App Store, according to management's updates on the store in the company's quarterly updates. But Apple doesn't always specify whether it's discussing its mobile App Store, its Mac App store, or both. It's clear, though, that Apple's mobile App Store has been doing very well. "The store's all-new design is off to a fantastic start," said Apple CFO Luca Maestri in Apple's fiscal first-quarter earnings call earlier this year when discussing the redesigned App Store for iOS. Further, Maestri cited App Annie data showing that the mobile App Store generated nearly twice the revenue of Android's Google Play revenue during the quarter.

Though Apple doesn't break out its App Store revenue, it's included in Apple's services segment, which saw revenue increase 31% year over year to account for 15% of Apple's total revenue in the company's most recent quarter. Continued growth in Apple's mobile App Store, along with a potential benefit from an overhauled Mac App Store later this fall, will likely help Apple's services business keep up its strong momentum.