Shares of Signet Jewelers Ltd. (NYSE:SIG) were flying higher today after the world's largest diamond jewelry retailer beat earnings expectations in its first-quarter report by a wide margin. It also maintained guidance in a tough retail environment. As a result, the stock was up 15.7% as of 11:37 a.m. EDT. 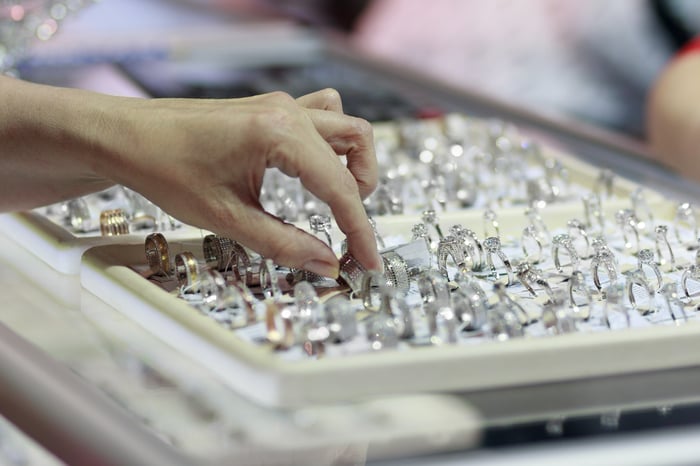 The parent of brands including Zales, Jared, and Kay said that comparable sales in the quarter were down 0.1%, a strong improvement from a 11.5% slide in the quarter a year before. Overall revenue in the period increased 5.5% to $1.48 billion, beating estimates at $1.4 billion even as the company is closing stores, due in part to the acquisition of James Allen parent R2Net, and favorable currency exchange rates. Comparable sales at James Allen jumped 29.4%, a sign that the deal is paying off.

However, Signet took a $448.7 million goodwill impairment charge on Zales, evidence that it overpaid for that 2014 acquisition, and the broader fundamentals of the business continued to erode. Gross margin declined 230 basis points to 32.7%, and excluding the impairment charge, operating income was down from $115.3 million to $24.1 million. Adjusted earnings per share plunged from $1.03 a year ago to $0.10, but that still easily cleared the analyst bar at a loss of $0.09.

New CEO Virginia Drosos sounded positive, saying, "In the first quarter, we saw signs of stabilization in our overall sales and once again achieved double digit growth in eCommerce."

Drosos also said that second-quarter revenue would be impacted by tougher comparisons and a shift in the calendar. However, the company still maintained its full-year guidance of comparable sales down low-to-mid-single digits, total sales at $5.9 billion-$6.1 billion, and adjusted EPS of $3.75-$4.25, numbers that were in line with expectations. Signet also said it would close 200 stores in the year as the company continues to adapt to the changing retail environment.

Today's jump comes after Signet stock had fallen nearly 75% over the last three years so it should be viewed in that greater context. This turnaround effort has only just begun. Whether it will succeed is still an open question.