Every year, Mary Meeker of venture capital firm Kleiner Perkins Caufield & Byers releases her annual internet trends report. For tech investors, the 300-slide presentation is a must-read, giving us a snapshot of where the tech world is at, and more importantly, where it seems to be headed.

The message this year is a lot like the prior few years: It's the age of dominant, large-cap internet companies, especially leaders Amazon (NASDAQ:AMZN), Alphabet (NASDAQ:GOOG) (NASDAQ:GOOGL), and Facebook (NASDAQ:FB), which have each ridden their monopoly-like positions in e-commerce, search, and social media to market-beating gains. 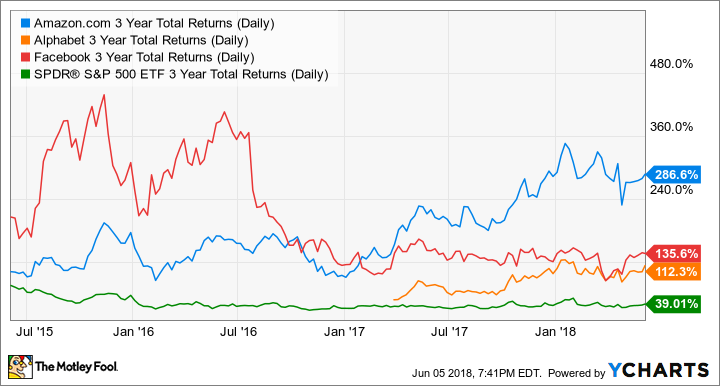 The question for investors now is: Can these stocks keep outperforming? Every indication from this year's KPCB report suggests they can.

Perhaps the biggest star of the report was Amazon, which is not only the No. 1 U.S. e-commerce company, but also the global leader in cloud computing, as well as the leader in the burgeoning smart home speaker market. This year's KPCB report showed the continued torrid growth in each of those industries. The U.S. e-commerce market growing like a weed, and last year, growth actually accelerated to 16%, up from the "mere" 14% growth in 2016. When the overall market you're in is not only growing but accelerating, that's a recipe for eye-popping gains.

Incredibly, e-commerce is not the only accelerating market in which Amazon dominates. No, the worldwide cloud computing industry is picking up as well, and at growth rates over three times that of e-commerce: You don't need to adjust your eyes: The top three cloud companies are growing a staggering 58%, accelerating from 54% from the fourth quarter of 2017. The cloud computing revolution is very real, and in-the-know investors apprehend only a handful of companies have the financial expertise and resources to compete in cloud infrastructure, which should benefit these leaders for years to come.

But wait, there's more! Amazon also was the subject of a third incredible slide on its Echo smart home speaker, which grew its installed base by a whopping 50%, from 20 million to 30 million, in 2017. Amazon's "skills," or functions that digital assistant Alexa can perform, is growing at an even higher rate, from near zero to over 30,000 in just a few short years. Of course, while Amazon's Echo has shown incredible growth, No. 2 smart speaker manufacturer Google may have the most impressive speaker on the market. Google has really been emphasizing its artificial intelligence (AI) chops over the past few years, using AI not only to optimize its core Search and YouTube digital ad business, but also to enter both the smart home speaker and cloud computing markets -- despite getting a late start relative to Amazon in each industry.

In this year's KPCB report, one slide showed how close Google's machines are to equaling (or, scarily, even surpassing) their human counterparts in terms of hearing and deciphering words: Looks like the age of 2001: A Space Odyssey's HAL is upon us (brace yourselves)!

But while Amazon and Google square off in a variety of markets such as cloud computing and AI voice speakers, the most profitable of all FANG companies, with a staggering operating margin of over 50%, is Facebook. The following chart from this year's report helps explain why: In just a mere three years, Facebook has been able to more than double its revenue per user, with most of those new dollars falling straight to the bottom line. That's a testament to Facebook's ad-targeting capabilities and unique value as the world's largest social media platform. In addition, revenue per daily active user (DAU) has risen as total DAUs grew 62.8% in that time frame -- a stunning achievement.

All signs point to tech

My main takeaway from the 2018 KPCB internet trends report? Tech rules. In fact, the tech industry's percentage of the MSCI (Morgan Stanley Capital International) index is at its highest level since the dot-com crash of 2000. While that may be an ominous sign to some, unlike the late '90s, these companies now generate not just "eyeballs," but significant revenue and cash flows. Judging by the performance of leaders Amazon, Google, and Facebook -- each of which has more financial resources and data than anyone else -- I wouldn't expect the momentum to slow anytime soon.