Nomura Securities recently published a research note in which it says that Intel (NASDAQ:INTC) CEO Brian Krzanich "was very matter-of-fact in saying that Intel would lose server share to AMD (NASDAQ:AMD) in the second half of 2018."

"This wasn't new news," the analysts said, "but we thought it was interesting that Krzanich did not draw a firm line in the sand as it relates to AMD's potential gains in servers." 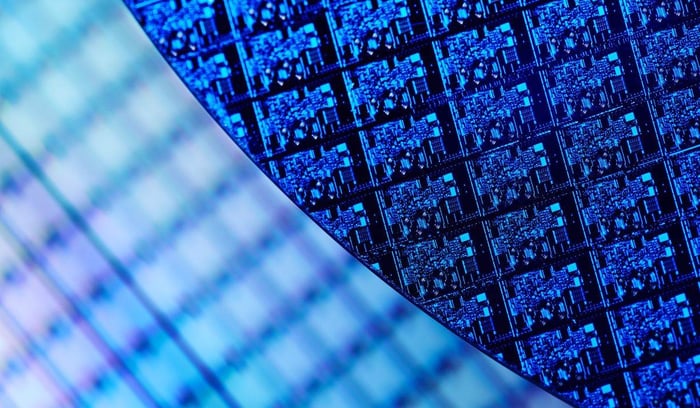 Apparently, according to the analysts, Krzanich merely "indicated that it was Intel's job not to let AMD capture 15-20% market share."

Once this research note was widely disseminated, AMD stock rose more than 3% during the June 11 trading session while Intel stock shed nearly 1%. Clearly, investors interpreted Krzanich's remarks as positive for AMD and negative for Intel.

It's not hard to see why.

Intel's pain could be AMD's gain

The fact that Krzanich is talking about trying to prevent losing 15-20% data center processor share to AMD tells me that Intel does, in fact, see AMD as a pretty serious threat to its lucrative data center business.

The reason that this could put off investors is that Intel has been quite public about how it expects its data center group -- its second-largest business today in terms of revenue and profits -- to be its main growth engine for years to come.

Going from virtually 100% market segment share to making it the company's mission "not to let AMD capture 15-20% market share" doesn't inspire a ton of confidence in Intel's outlook for its position in the data center processor market.

Considering that AMD's total revenue in 2017 was $5.33 billion and, according to analyst estimates , is set to hit $6.7 billion in 2018, that incremental data center revenue could really move the needle for AMD. Moreover, since that revenue would likely come in at gross profit margin levels well above AMD's corporate average, it could have a disproportionately positive impact on the company's profitability.

Losing that revenue would clearly slow Intel down in the data center processor market; at a minimum, that loss could manifest itself as revenue loss, but there's also potential for gross profit margin compression, as well.

In a nutshell, AMD gaining significant data center processor share from Intel would be a clear positive for AMD and a clear negative for Intel.

I'm not going to make a prediction here about what might happen, but I'd imagine that the investors who were scooping up AMD shares (as well as possibly selling or shorting Intel stock) after Krzanich's comments were thinking along similar lines.

After the Nomura report was published, I reached out to Intel for comment. Intel told me that its communications team "decided not to elaborate on data center competition and [Brian Krzanich's] remarks to Nomura beyond the below statement."

Here was that statement, in full:

We see significant opportunities for growth in the data center -- an estimated $70 billion market opportunity by 2021 where we have an opportunity to grow our total silicon datacenter market segment share from where we are today. To win, we will continue our history of CPU leadership and deliver the broadest portfolio of products that, when combined, change the basis of competition in the data center.

While we are prepared for a more competitive environment as we move through 2018, we've already factored that into our financial forecast and we're in a great position to compete. We remain very confident in our products, our roadmap and our competitive position. For example, Intel® Xeon® processor Scalable family represents the biggest advancements in platform capabilities in a decade and later this year we'll introduce breakthrough new Intel Optane DC persistent memory and storage technology architected specifically for the data center

In this statement, Intel acknowledges that it'll be facing a "more competitive environment" and says that its current financial guidance for the year already bakes in the increased competition from AMD and, potentially, others.

The reason this statement leaves a bad taste in my mouth is that Intel is claiming that it's so confident in its products and platform capabilities, and is in a "great position to compete," yet the CEO -- who, late last year, dumped just about every share of Intel stock that he possibly could -- is telling analysts that he's expecting to cede market share to AMD and that the company's "job" is to keep that share loss from getting too out of hand.

Moreover, while Intel's statement indicates that its 2018 financial guidance already contemplates a "more competitive environment," the reality is that AMD has publicly stated that it aims to achieve "mid-single digit" data center processor market share by the end of 2018.

If AMD can maintain or even build off of that market share during all four quarters of 2019 -- something that AMD management seems optimistic about doing -- then it's not Intel's data center group performance in 2018 that investors should be worried about, but its performance in subsequent years.