There's no shortage of buzz -- Buzz buzz, if you will -- for Walt Disney's (NYSE:DIS) Toy Story Land. The new 11-acre Toy Story-themed expansion opened this morning at Disney's Hollywood Studios in Florida. Disney World's least visited park can use the boost, but it's not the only thing being introduced at the entertainment giant's theme parks today. The new Play Disney Parks mobile app makes its debut this morning, giving guests at Disneyland and Disney World a new way to enhance their time at the two U.S. resorts.

Families as well as individual players can fire up the app to engage in themed augmented reality games playable in the queue areas of certain attractions. Strolling through the park can unlock achievements and other virtual goodies. Folks can also earn points playing Disney trivia. There's even a curated playlist of theme park music that's available. Toy Story Land is going to be a big asset to the only Disney park worldwide to experience a downtick in attendance in 2017, but don't dismiss the long-term potential of today's mobile app debutante. 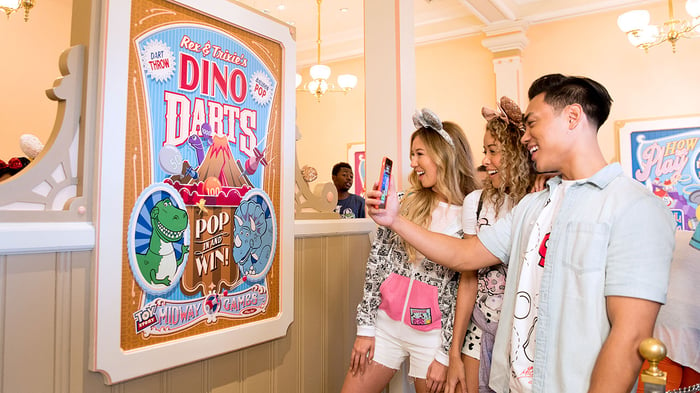 You've got a friend in me

If you're a Disney shareholder, there are several benefits to Play Disney Parks. At its very core, the app make some of the more tedious parts of a visit to a theme park -- waiting in long lines for popular rides -- more enjoyable. Enhancing the experience will make it more likely that folks come back, and guests will stay longer and spend more on food and merchandise purchases if long queues are no longer a drag.

The first batch of games and achievements will be Disney-based, but there's no reason why Disney can't cash in on future additions through corporate sponsors and other advertisers that want to get their brands in front of Disney's reasonably affluent clientele. Setting up virtual achievements that can only be unlocked in a certain span of time will likely spur repeat visits, and there's always the hope that Play Disney Parks could spark renewed interest in jaded teens who have outgrown Disney's relatively tame attractions.

Disneyland and Disney World are humming along nicely. Disney's theme parks and resorts segment was the only division to grow its revenue and operating profit in fiscal 2017. The industry itself is coming off a blowout quarter, as all five publicly traded theme park and amusement park operators grew revenue at a double-digit percentage clip through the first three months of this year. However, Disney knows the power of mobile apps. It saw its parks overcome with Pokemon Go players two summers ago, and now it can be the gatekeeper of new diversions with Play Disney Parks. This morning's debut of Toy Story Land is big. Don't be surprised if, in retrospect, today's official rollout of Play Disney Parks app is even bigger.