The uranium industry is at an interesting juncture right now. Leading uranium miners like Cameco Corporation (NYSE:CCJ) are going all out to help rebalance the demand and supply in the market as the debate over the potential dangers of nuclear power reactors, spurred by Japan's Fukushima Daiichi disaster of 2011, continues. (Nuclear reactors are key users of uranium fuel.)

The sentiment among investors is turning increasingly positive, as reflected in Cameco stock's 21% run-up so far this year. I see more upside ahead for the stock than downside. Here's why.

What are uranium producers thinking?

Uranium prices have been in a free-fall in the past couple of years on fears of an oversupply, but nearly every uranium producer now believes the market is overly cautious and underestimating the latent demand for the fuel. 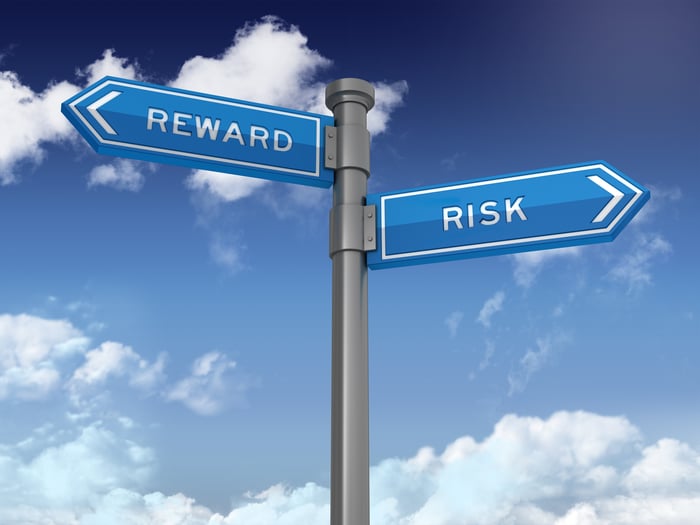 Is Cameco a risky bet, or will it reward you? Image source: Getty Images.

Here's what some of the uranium producers have had to say in recent months:

There are some big things that have happened in our industry recently, which suggests that there's a tightening of supply, and that can only be good for upward pressure on uranium prices.
-- Leigh Curyer, CEO of NexGen Energy (NYSEMKT:NXE), in an interview with Investing News Network

I really think there will be an increasing share of renewables, but if we look at the [International Energy Agency's] World Energy Outlook, we see that demand for electricity around the world will double in the 2050s. And it will need to emit two times less CO2, meaning four times less carbon per megawatt-hour. For this, nuclear really can make a contribution.
-- Philippe Knoche, CEO of Orano (formerly Areva), in an interview with Politico

We believe that uranium is fundamentally and structurally mispriced in the current market, and on a historical basis.
-- Andre Liebenberg, CEO of Yellow Cake

The air is clearly thick with expectations of a uranium industry revival. Yellow Cake has, in fact, added an interesting angle to the story.

There's a lot happening in the uranium industry

Yellow Cake, named after the raw uranium concentrate, is a new uranium venture that's set to list itself in London to raise funds to buy up to 8.1 million pounds of uranium for $170 million from Kazatomprom, the world's largest uranium miner. As that's nearly 25% of Kazatomprom's annual production, Yellow Cake hopes acquiring all that uranium will help ease the supply glut. 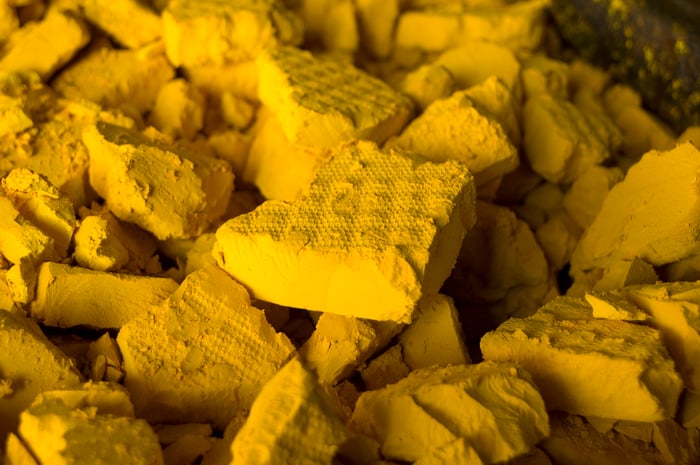 It remains to be seen how Yellow Cake will impact uranium supply or prices, but heavyweights including Cameco and Kazatomprom have already swung to action to bring equilibrium to the uranium markets. Last year, Cameco decided to suspend operations at its McArthur River and Key Lake mines. McArthur River is also the world's largest high-grade uranium mine. Soon after, Kazatomprom announced plans to cut production by 20% between 2018 and 2020. Australian-based Paladin Energy was the latest to jump on the bandwagon as it suspended operations at the Langer Heinrich mine in response to unfavorable business conditions.

These are significant developments as Cameco and Kazatomprom are also the world's largest uranium suppliers. Canada-based Uranium Participation Corporation just revealed an interesting fact in its latest press release: Global uranium production slipped to 154 million pounds last year from 162 million pounds in 2016, and is expected to drop sharply to or below 135 million pounds this year, according to UxC Consulting. The consulting company also projects demand for uranium to be around 192 million pounds in 2018.

If these projections come true, a substantial chunk of uranium should come off the market this year even as the production dip deepens. There's no reason prices shouldn't move up.

In fact, production of uranium concentrate in the U.S. slumped 64% sequentially to lows not seen in 20 years during the first quarter, according to the U.S. Energy Information Administration. U.S. might be among the smaller uranium-producing countries, but any drop in supply works in the industry's favor right now. 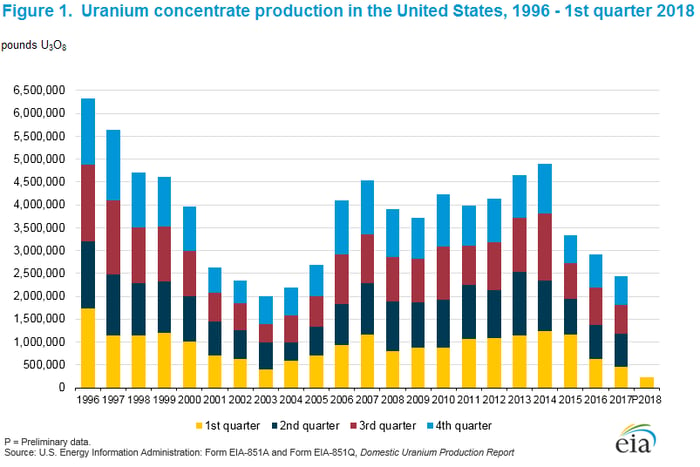 Uranium prices, meanwhile, appear to have bottomed: The average spot uranium price bounced off $20 per pound in October last year and has stayed well above $21 per pound since, even hitting $22.73 per pound in May, according to Cameco.

With industry production on the decline and Yellow Cake reportedly set to go on a uranium buying spree, a price recovery could be just around the corner. That's just what Cameco needs to boost its margins even as it strives hard to curtail costs, ease inventory, maintain manageable debt, and boost cash flows.

Cameco's management is taking all the necessary and right steps to ride out the storm, and all it needs is a recovery in uranium prices to get back on the growth track. It won't come fast and easy, and investors may have to put up with lower sales numbers from the company, at least this year.

Yet Cameco's story goes beyond its top line, and investors need to focus more on its cash flow trend, especially since the company's trailing-12-month operating cash flow hit multiyear highs. With the stock still trading at historically low price-to-cash flow of 6.5, Cameco is the best bet for patient investors bullish about the future of nuclear energy.