Investing in dumb phones could actually be a smart move.

Alphabet's ( GOOG -0.87% ) ( GOOGL -0.68% ) Google recently invested $22 million in KaiOS, a maker of feature phone operating systems. The San Diego-based start-up announced that it would integrate Google's apps into Nokia's ( NOK -1.39% ) KaiOS-powered devices earlier this year, and this new investment should support those efforts.

Google's interest in feature phones (aka "dumb phones") might be surprising, since it already owns Android, the most popular smartphone OS in the world. However, it makes sense when we consider that many mobile users in developing markets still use feature phones. 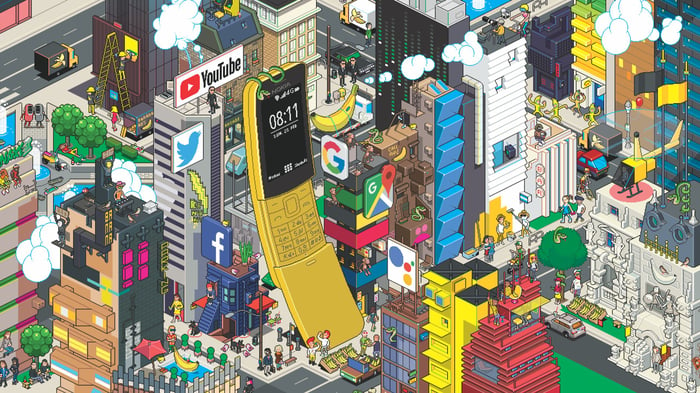 Why do feature phones matter?

Feature phones like the Nokia 3310 and 8110, which were both refreshed versions of classic designs, accounted for a large portion of HMD's shipments in key markets like India. Another popular feature phone in India is wireless carrier Reliance Jio's Jio Phone. Both the Nokia 8110 and Jio Phone run KaiOS.

Higher-end feature phones cost about the same as low-end smartphones, but they use cheaper data plans. As a result, many customers in key emerging markets like India are clinging to feature phones instead of upgrading to smartphones.

That expansion, along with the launch of other cheap Android devices, secured Google's position as the mobile OS leader in India. However, DeviceAtlas recently reported that between the first quarters of 2017 and 2018, Android's market share tumbled nearly 12 percentage points to 71.6%.

Meanwhile, KaiOS -- which wasn't reported as a stand-alone OS last year -- seized 15.1% of the market and toppled iOS as the country's second-most-popular mobile OS. KaiOS bridged the gap between feature phones and smartphones with a new class of "smart feature phones" with support for 4G networks, NFC payments, newer apps, and dual SIM cards. KaiOS recently told the tech-news website TechCrunch that over 40 million KaiOS-powered devices have been shipped worldwide.

KaiOS' surprising growth likely stunned Google, since the tech giant relies heavily on India for its long-term growth. Last year, India overtook the U.S. as the world's second largest smartphone market after China, and that growth is expected to offset slowing smartphone sales in the Chinese and American markets.

By investing in KaiOS, Google ensures that core apps like Search, Maps, YouTube, and Assistant reach feature phone users. Google likely hopes that those users will grow dependent on the services, and that they'll eventually upgrade to Android smartphones.

The rebirth of Firefox OS

KaiOS is technically the successor to Mozilla's Firefox OS, an open-source OS for smartphones, tablets, and smart TVs that was discontinued in 2016. Firefox OS was succeeded by a community-driven OS called Boot to Gecko (or B2G), which eventually evolved into KaiOS.

An investment of $22 million is pocket change for Google, which generated over $21 billion in free cash flow over the past 12 months. But it's a big investment for KaiOS, and it could secure its position as the so-called "Android of feature phones." As for Google, it's a smart tactical move that prevents KaiOS from evolving into a more dangerous competitor.