Shares of VF Corporation (NYSE:VFC) have gained 11% this year, according to data from S&P Global Market Intelligence, as the parent of brands like North Face, Vans, and Wrangler benefited from a strong retail environment and apparel market, as well as some acquisitions.

The stock overcame a sell-off following its fourth-quarter earnings report to record double-digit growth by the midyear mark. 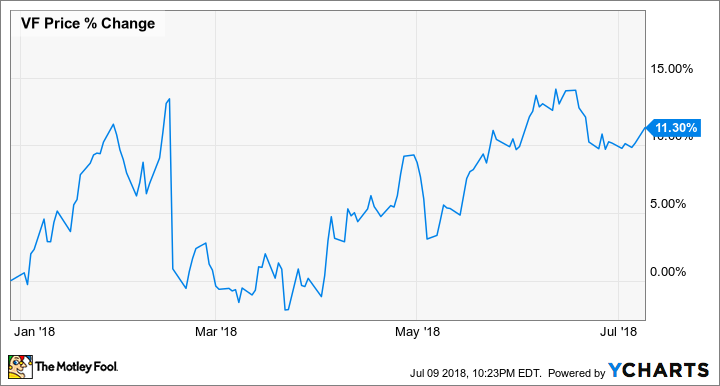 VF rode the bull market to kick off the year: The stock tacked on 10% in January as investors anticipated the company benefiting from the lower corporate tax rate. However, it would soon give up those gains after VF missed estimates in its fourth-quarter earnings report. Adjusted earnings per share increased 13% to $1.01, short of expectations by $0.01. With the help of last year's Williamson-Dickie acquisition, revenue jumped 20% to $3.65 billion, but that was also slightly short of the consensus. VF also said it would sell the Nautica brand. The stock closed the Feb. 16 session down 11%.

In March, VF said it would acquire Altra, a footwear brand that generated about $50 million in revenue in the previous year. That same month, it also said it would sell Nautica to Authentic Brands. In April, VF completed a previously announced deal to acquire Icebreaker, a maker of outdoor and sports apparel, sending the stock higher.

Shares pulled back briefly following the results of its transition quarter in May, which was called that because the company is shifting its fiscal calendar. Overall revenue increased 22%, or 8% in currency-neutral terms excluding the impact of the Williamson-Dickie acquisition. Adjusted EPS soared 30% to $0.67.

VF's tried-and-true acquisition strategy continues to deliver solid results and gives the company diversification and international exposure that many of its peers cannot offer. The Williamson-Dickie acquisition, which brought it the popular workwear brand Dickies, appears to be paying off, immediately adding to revenue and profit growth. With the broader economy and the retail market looking strong, I'd expect VF, which also offers a 2.3% dividend yield, to continue to be a steady winner.