Most marijuana stocks claim astronomically high valuations. That's because investors anticipating tremendous growth have clamored to buy the stocks. But this expected growth also helps those same investors feel as if they're not overpaying for these stocks.

As I was researching some stocks recently, I stumbled across a surprising valuation metric for one of the biggest marijuana stocks in terms of market cap -- GW Pharmaceuticals (NASDAQ:GWPH). Based on this valuation metric, the cannabinoid-focused biotech stock actually looks dirt cheap. But there's more to the story. 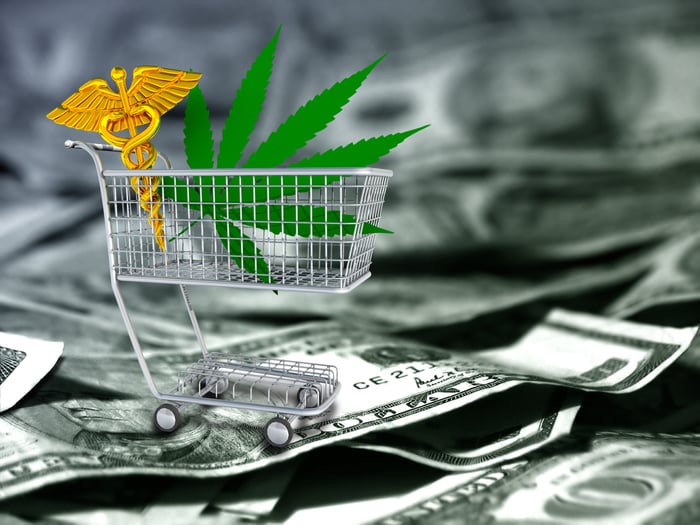 Don't hang your hat on this PEG

At first glance, it might seem to make sense that the biotech stock could be a bargain. After all, GW Pharmaceuticals recently won FDA approval for the first plant-based marijuana drug, Epidiolex. Market research firm EvaluatePharma thinks that Epidiolex will become one of the top new drugs launched in 2018, with sales of around $1 billion by 2022. It doesn't seem too far-fetched that rapid earnings growth fueled by GW's new drug could make the stock look cheap based on the PEG ratio.

That's what I thought might be the story when I first noticed GW Pharmaceuticals' super-low PEG ratio. But I was wrong.

First of all, GW Pharmaceuticals is losing money right now. The biotech is also expected to be unprofitable next year. This means that the company's price-to-earnings (P/E) multiples are negative. For GW to truly have earnings growth, it must first have positive earnings.

So how did GW Pharmaceuticals warrant such a seemingly attractive PEG ratio? The negatives on the P/E ratio and the earnings growth projection cancel each other out. Basically, GW's low PEG ratio is as fake as a three-dollar bill.

I think the negative five-year growth projection from Thomson Reuters is inaccurate. The growth estimate for GW Pharmaceuticals next year is 40.4%. My hunch is that the five-year figure simply hasn't been updated lately. In my view, GW Pharmaceuticals should be on track to significantly improve its bottom line with the launch of Epidiolex later this year.

But is GW Pharmaceuticals stock really valued attractively right now? It depends on your opinion of how well Epidiolex will perform.

GW already claims a market cap of close to $4.2 billion. Let's assume that EvaluatePharma's estimate that Epidiolex will generate annual sales of around $1 billion is relatively accurate. That puts GW stock trading at roughly 4 times future sales -- a relatively attractive valuation, especially considering that the biotech has other candidates in its pipeline.

However, my colleague Cory Renauer takes a much more pessimistic view than EvaluatePharma and other analysts do. Cory recently stated that he would be "shocked if annual Epidiolex sales ever reach $300 million." If we use his best-case scenario of $300 million in annual sales for the drug, GW Pharmaceuticals stock currently trades at 14 times future sales. That's not a bargain -- it's closer to highway robbery.

What to make of all this

The major takeaway here is that investors shouldn't rely solely on numbers you find online to make decisions. Make sure you understand how the numbers were derived. And make sure you agree with the assumptions that were made in calculating those numbers.

As for GW Pharmaceuticals, the stock could be a relatively good deal right now or an expensive stock to avoid. It depends on your perspective about the sales prospects for Epidiolex.

I suspect that the actual sales for Epidiolex will be closer to the $1 billion mark than the pessimistic level of $300 million. My primary assumption is that insurers will be willing to cover Epidiolex. If they do, using Epidiolex will be significantly less expensive for patients than buying equivalent doses of cannabidiol. And if that's the case, Epidiolex should be a commercial success for GW Pharmaceuticals.

Don't make your investing decision on my assumptions, though. Investigate the arguments for and against GW Pharmacueticals' prospects on your own. Do the same thing for any stock you're considering. Sometimes, you might discover that stocks aren't the bargains they appear to be. Other times, though, you could determine that the market is overlooking a company's growth potential. That's what makes investing fun.