Bridgepoint Education (NASDAQ:ZVO) stock has skyrocketed today, up by 46% as of 11:45 a.m. EDT, after the for-profit education company reported second-quarter earnings results. Cost-cutting and an income tax benefit boosted the bottom line.

Revenue in the second quarter came in at $120.8 million, down from $124.6 million a year ago. Total costs and expenses declined to $109.3 million, allowing Bridgepoint to post operating income of $11.6 million. The company also said it recognized an income tax benefit of $5.4 million during the quarter. After everything was said and done, net income was $17.2 million, or $0.63 per share. On a non-GAAP basis (which excludes the tax benefit as well as a couple other items), earnings per share came in at $0.53. 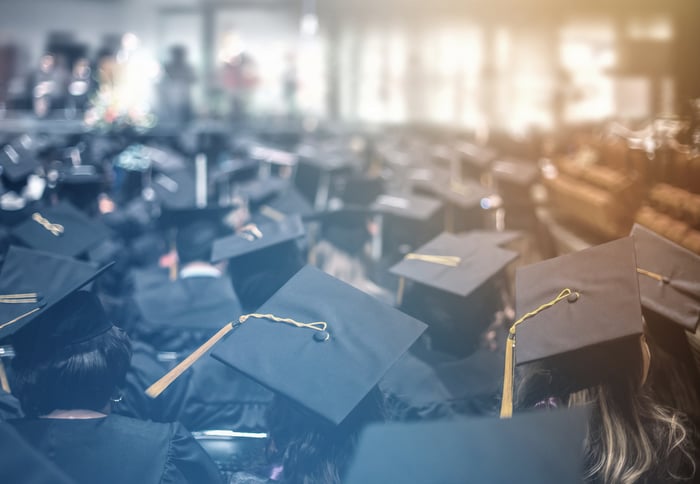 Bridgepoint had just under 40,100 students enrolled at the end of June.

"Let me quickly walk through some of these highlights. First and foremost, our new enrollment grew low single digits, marking a return to growth for the first time in seven quarters," CEO Andrew Clark said on the conference call. "This return to growth reflects the deliberate marketing strategy that optimizes our spending while generating a higher-quality and more efficient mixture of inquiries designed to attract new students with a greater potential to succeed."

In terms of guidance, CFO Kevin Royal said the second quarter "marked an inflection point for Bridgepoint as we delivered a return to new enrollment growth," and he expects year-over-year new enrollment growth in the second half of the year to be in the "low- to mid-single-digit range on a quarterly basis in Q3 and Q4." Average enrollment is expected to trend lower on a sequential basis, and Bridgepoint anticipates admissions, advisory, and marketing expenses in the next two quarters to be "consistent with the prior year as a percentage of revenue."