Revenue surged 54% to hit a record $112.3 million for the quarter. The Trade Desk's own guidance three months ago was calling for just $103 million on the top line, 41% growth. Adjusted earnings before interest, taxes, depreciation, and amortization (EBITDA) rose 46% to $36.9 million, barreling through the $30 million that it was targeting for adjusted EBITDA back in May. 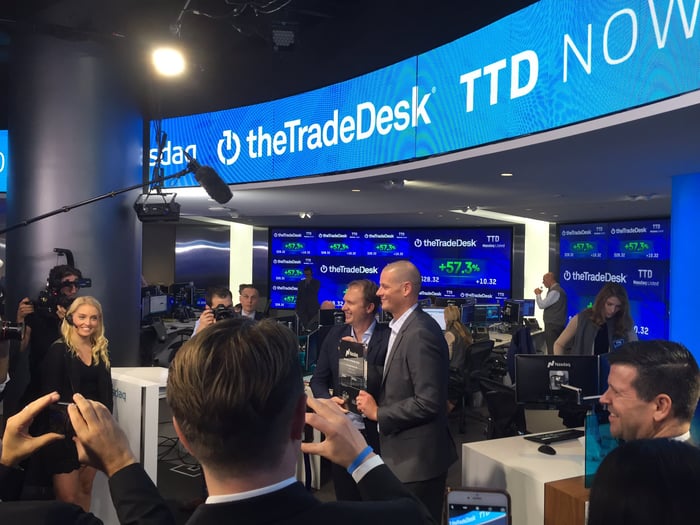 Demand for The Trade Desk's data-driven ad buying platform is booming. The $112.3 million in revenue that it just served up in a single quarter is nearly as much as it reported in revenue for all of 2015.

Marketers are taking to The Trade Desk's algorithmic solutions, and several of its categories including connected TV, audio, mobile video, and mobile in-app saw their numbers more than double. Advertisers that come to the company tend to stick around. Customer retention has now clocked in north of 95% for 19 consecutive quarters.

Investors have been the big winners. The stock has more than doubled in 2018, and that was before its post-earnings pop. The stock hit triple digits for the first time in Thursday's after-hours session. That's not too shabby for a company that went public at $16 just two years ago.

Once again, we see The Trade Desk jacking up its earlier guidance. It's now eyeing $456 million in revenue for all of 2018, up from its May goal of $433 million and February forecast of $403 million. We're also seeing a rosier update for adjusted EBITDA, with goalpost moved to $140 million. The initial guidance for the third quarter is calling for $116 million in revenue on adjusted EBITDA of $33 million. The current quarter's projections may represent sequential declines, something that may seem problematic. There's seasonality to the ad business, but The Trade Desk has been able to grow its top line between the second and third quarters in at least each of the past three years. However, given The Trade Desk's knack for conservative guidance and its recent momentum, it's easy to see why the market's bidding up one of this year's biggest winners even higher.