Shares of Kroger, Inc. (NYSE:KR) were dropping today after the supermarket operator issued an underwhelming second-quarter earnings report. Comparable sales were short of analyst estimates, and the company warned on future profit growth as it continues to make investments. As a result, Kroger shares closed down 9.9%. 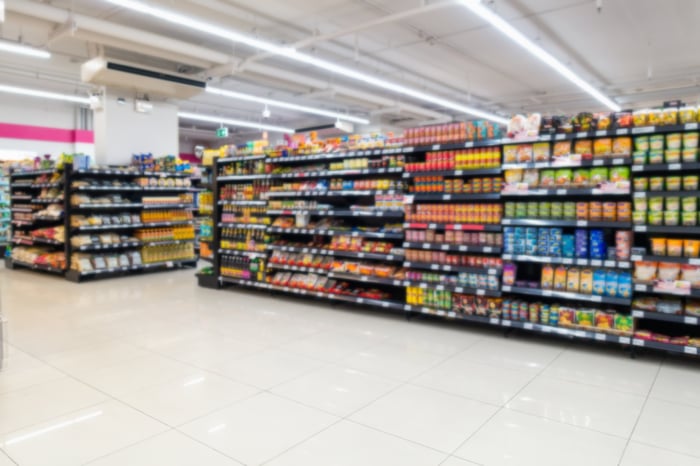 The nation's largest traditional supermarket operator said comparable sales improved 1.6% in the quarter, a solid clip, but short of analyst expectations at 1.8%. Total revenue increased 1%, or 1.8% excluding the impact of fuel, divestitures, and acquisitions to $27.9 billion, which was slightly short of the consensus at $28 billion.

Gross margin fell 36 basis points to 21.3%, reflecting lower prices, higher transportation costs, and the growth of the low-margin specialty pharmacy business. Operating, general, and administrative expenses rose 36 basis points as a percentage of revenue due to higher spending on incentive plans. Adjusted earnings per share (EPS) rose from $0.39 to $0.41 as the company benefited from a lower tax rate and a sharply reduced share count. That result was ahead of estimates at $0.38. Digital sales again grew briskly, increasing more than 50%.

We are only two quarters into our three-year Restock Kroger plan, and we are making solid progress. Kroger customers have more ways than ever to engage with us seamlessly through our recently launched Kroger Ship, expanded availability of Instacart, successful ClickList offering, and selling Simple Truth in China through Alibaba's Tmall. We feel good about our net earnings per diluted share and ID sales results in the second quarter. We expect our investments in space optimization during the first half of 2018 to become a tailwind late in the third quarter.

Investors appear to be frustrated at Kroger's lack of profit growth, but the company is taking important steps in its Restock Kroger initiative to improve store layout and private-label brands as well as delivery and pick-up options. It's also making deals with the likes of Ocado and Home Chef to evolve its business to meet customers where they are. Though profit growth may be stalled, the company is clearly making moves to make itself more competitive. Given that, it's hard for investors to be disappointed in the company's performance despite the sell-off.