Here are three fintech stocks you ought to learn about.

The real beauty of fintech stocks is that they give you exposure to themes in the financial industry without the inherent risk of traditional financial businesses like banks and insurers. Plus, because they're service or software businesses rather than risk takers, a fintech company's growth isn't limited by its balance sheet. Few banks could ever grow at a 30% clip year over year, but many fintechs can do just that.

Matt Frankel, CFP (Square): One fintech stock I'm particularly excited about is Square, which has been one of the best-performing stocks in the market recently, up by 160% so far in 2018. However, I think Square could be just getting started.

Simply put, the long-term potential of Square's business is massive. Its payment-processing hardware processes transactions for only a small percentage of its addressable market and has tremendous room to grow -- particularly internationally and in emerging markets where most businesses still don't accept card payments. Square Capital, the company's business-lending operation, has grown tremendously, but is still being used by only about 3% of its seller base, according to second-quarter figures. 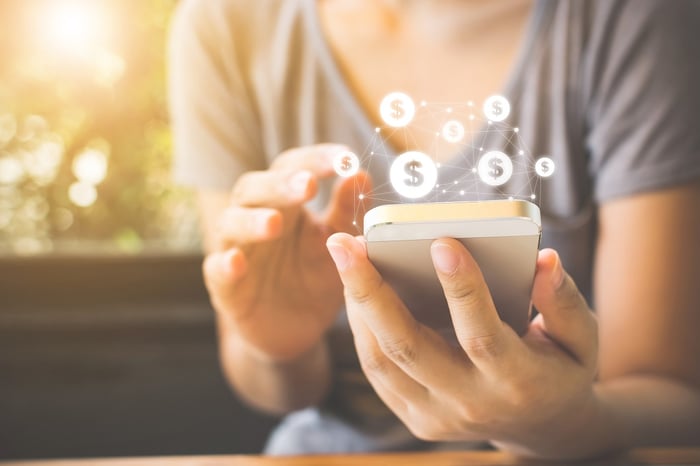 And then there's the enormous success of Square Cash, the company's person-to-person payments platform that recently surpassed Venmo for total downloads and boasts over 7 million active users. Square is yet to generate much revenue from Cash, but there's tremendous long-term possibilities for cross-selling other financial services (personal loans, investment products, and more) to these customers.

Although Square's stock has been a big winner lately, I believe it could be just starting to scratch the surface. For perspective, Square's market cap is less than one-fourth of PayPal's and I think the company has just as much (if not more) long-term revenue potential.

Square's adjusted revenue is growing at a 60% annualized rate as of the second quarter, and there's no reason to believe that this growth rate can't continue for years to come as more customers join the company's ecosystem and Square continues to evolve into a one-stop financial services provider for them.

Dan Caplinger (Mastercard): It might not be the newest player in the space, but Mastercard was one of the first companies to realize just how important the global market was for establishing a cutting-edge payment network. As one of the top two credit and debit card companies in the U.S., Mastercard was quicker than its chief rival in promoting its international reach and moving into markets with greater growth prospects than it had domestically. For a long time now, Mastercard has routinely seen faster growth outside the U.S., and that trend looks likely to accelerate as more foreign countries catch up to the first-movers in the electronic payments space.

At the same time, Mastercard hasn't shied away from acquisition opportunities to go beyond its legacy business. Acquiring South African company Oltio has given Mastercard more access to the African mobile payments market and is making the MasterPass platform an increasingly important part of its overall business. Meanwhile, buying VocaLink has allowed Mastercard to facilitate nearly instantaneous bank transfers in key markets across the globe. Earlier purchases of companies like cloud analytics provider Applied Predictive Technologies and fraud detector NuData Security have also added to Mastercard's suite of services.

All told, Mastercard is a giant in the fintech space, and its size gives it plenty of room to make further acquisitions. That's good news for the potential targets in fintech, but it also stands to benefit Mastercard as well.

The king of tax and accounting software

Jordan Wathen (Intuit): This fintech company is firmly cemented on my watch list because while I think the business is exceptional, it's priced for perfection at 48 times trailing earnings.

If you don't recognize Intuit, you likely recognize its core products. The company makes its money primarily from TurboTax and QuickBooks, software packages that help consumers and small businesses file their taxes and manage their books.

TurboTax is to the tax preparation business what Netflix and Redbox were to brick-and-mortar movie rental shops. In the last tax year, more than 36 million federal tax returns were filed by Intuit, making it the market leader by a country mile. The software retains a customer's data, automatically completing certain fields and making tax time as painless as possible. Once customers use the software, they're likely to return rather than shop around for a lower-priced competitor.

And though QuickBooks has been the go-to small business accounting software since the turn of the millennium, all signs suggest this star is far from burning out. With plans that start at just $10 per month, QuickBooks Online makes it easy for small businesses to track their income, expenses, and manage their payroll. Plus, thanks to seamless integration with its tax software, these two products feed business to one another.

Impressively, Intuit reported that QuickBooks Online subscribers increased 43% year over year in the most recent quarter. Revenue generated from each incremental customer flows almost directly into pre-tax profit, since the cost of supporting the marginal customer is trivial. For me, Intuit is a business I love at a price I don't, but it's worth keeping top of mind, as I'd happily snap up shares if the market turned cold on this growth story.