The case for buying stock in Dover Corporation (NYSE:DOV) seems to be a strong one at first glance. After all, Dover doesn't own the sexiest set of businesses out there, and its expected 3% to 4% organic revenue growth rate isn't the most compelling growth story of 2018. Moreover, the company has a recent history of operational mishaps. It gets worse: Management recently admitted overestimating end demand in one of its three segments in 2018 (refrigeration & food equipment) and candidly talked of the need to execute better on margin conversion.

However, investing in stocks isn't just about buying great businesses, it's about buying stocks at great prices, and I think Dover might fit the bill for value-orientated investors. Here's why.

The case for buying Dover Stock

There are two key arguments to consider:

In short, on a risk/reward basis, Dover's stock is attractive, and furthermore, most of its upside potential depends on self-help initiatives rather than a reliance on help from end markets. Let's take a closer look at what's going on.

Within the investing world, Dover always used to be known as an industrial stock with heavy oil and gas exposure, but following the spinoff of its upstream energy business, now listed as Apergy Corporation (NYSE:APY), Dover is very much part of the multi-industry industrial group of stocks that includes companies like 3M Company (NYSE:MMM), Illinois Tool Works (NYSE:ITW), and Roper Technologies (NYSE:ROP).

Unfortunately, the company's execution within its three remaining segments -- engineered systems; fluids; and refrigeration and food equipment) hasn't matched that of its peers. In fact, Tobin was moved to announce a restructuring plan intended to improve performance in its retail refrigeration and Dover Fueling Systems (fluids segment) businesses.

In a nutshell, during a recent investor meeting, Tobin candidly acknowledged that management had been guilty of overestimating retail refrigeration demand, and consequently, the business needed downsizing. Moreover, Dover Fueling Systems had some "self-inflicted execution challenges," which Tobin plans to fix via plant realization and cutting selling, general and administration, or SG&A spending.

Management expects to generate $130 million in annualized SG&A savings by 2019, and then use $30 million of this figure in order to reinvest in growth opportunities. So let's call it a $100 million improvement in costs. The estimated one-off costs for the restructuring is expected to total $40 million, to be split across the second-half of 2018 and the first-half of 2019.

Consequently, analysts have Dover's EPS growing at a near 12% rate in 2019 to $5.38 -- this compares favorably to the 7%-9% EPS growth rate forecast for 3M, Illinois Tool Works and Roper Technologies estimated growth rate in the same period.

Valuation provides a margin of safety

Of course, it's one thing to have a coherent plan and it's another thing to execute it and Tobin clearly has work to do. However, Dover does have a consistent record of good FCF generation, and that's expected to continue.

For example, on the second-quarter earnings call Tobin reaffirmed the target for FCF conversion from revenue to be around 10% in 2018. Based on analyst revenue forecasts that means FCF of around $700 million, and would put Dover on a forward price to FCF multiple of around 18 times FCF -- cheaper than 3M, and on a par with Illinois Tool Works.

Moreover, Dover's guidance calls $2.5 billion -$3.5 billion in operating cash flow in 2019-2021 with capital expenditures to revenue of 2%-4%. Using my rough estimates (midpoint of guidance) that works out to $780 million a year, which would put Dover on a price to FCF multiple of 16.7 times. That looks attractive for business set to grow earnings faster than its peers. 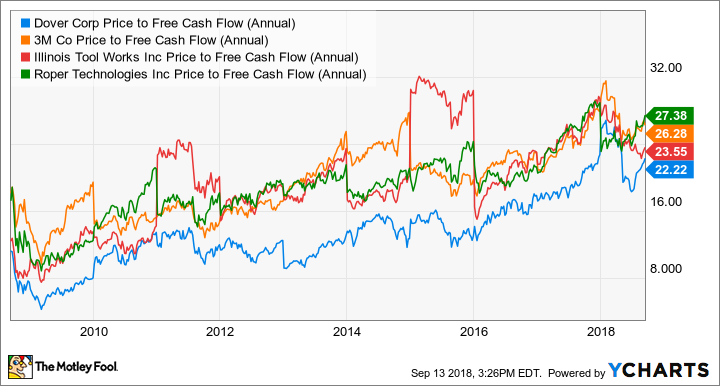 What to do with Dover's stock

Despite the somewhat disappointing operational performance in 2018, Dover's stock has outperformed Illinois Tool Works and 3M, and based on management's guidance there is more room to run. Of course, there's no guarantee that Dover will hit guidance for 2018, let alone 2021, but the valuation supports some disappointment and on a risk/reward basis Dover is a stock worth looking at very closely.