The only things rocking at Cracker Barrel (NASDAQ:CBRL) these days are the rocking chairs on its front porch. The throwback casual dining concept that combines a restaurant specializing in southern cooking with a rustic country store finds its stock hitting new 52-week lows this week. A rough financial report on Tuesday morning is the culprit.

Cracker Barrel didn't exactly serve up comfort food in its fiscal fourth quarter. Revenue growth failed to live up to analyst expectations, and adjusted earnings went the wrong way. Comps on the restaurant side declined slightly. The chain's guidance for the new fiscal year also fell well short of where Wall Street pros were parked. It was a rough performance, sending the shares nearly 5% lower on Tuesday. The market doesn't seem to want to stick around for dessert. 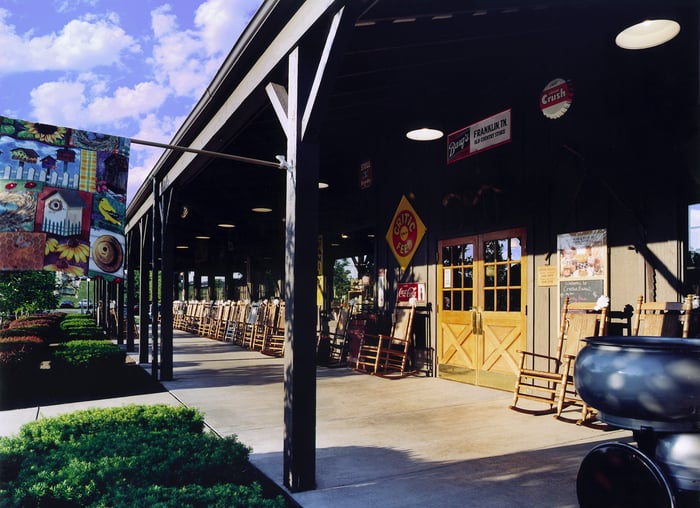 Revenue rose 9% to $810.9 million in the fiscal fourth quarter, short of the $825.5 million that analysts were modeling. A 9% uptick on the top line may not seem so bad, but the results included an extra week during this fiscal period. Back that out, and revenue grew at a meager 1.3% clip. Things only get worse as we work our way down the income statement.

Operating income dipped slightly, and that's with the benefit of the extra week this time around. The adjusted operating profit declined 14%. Cracker Barrel has been aggressively buying back its shares, a bad look with the stock at its lowest levels since late 2016, but a common strategy to boost net income on a per-share basis. It's finally not working as a way to bail out Cracker Barrel's contracting margins. Earnings per share may have risen to $2.55 from $2.23, but analysts were holding out for $2.70. Once again, we have to back out that extra week to get an apples to apples -- or apple cobbler to apple cobbler -- comparison, and we arrive at a profit of $2.19 a share, less than a year earlier.

The biggest problem for Cracker Barrel's top line is getting people to its restaurants, particularly during the dinner segment, where menu additions and marketing efforts failed to draw crowds. Traffic declined 3.5% during the fiscal fourth quarter. The silver lining is that the average check per guest rose 3.1%, but that translates into an overall 0.4% dip in comparable-restaurant sales. The store end fared better, with comps up 1.3%. In a nutshell, there are fewer folks going to Cracker Barrel these days, but they are, thankfully, spending more.

The year ahead is going to be challenging. Cracker Barrel sees revenue of roughly $3.04 billion, in line with analyst expectations and flat with fiscal 2018's showing -- but the last year did have that extra week. Cracker Barrel expects to open eight new restaurants this year with flattish comps. The real dagger is its bottom-line guidance. Cracker Barrel is expecting earnings per share to clock in between $8.95 and $9.10, well short of the $9.60 per share that analysts were projecting. Cracker Barrel expects its operating profit margin to continue to contract, and naturally, that didn't sit well with Wall Street.

Jon Tower at Wells Fargo is sticking to his neutral rating on the stock and lowering his price target to $139. Tower, like his fellow analysts, concedes that he was too optimistic in sizing up the chain's near-term prospects. He feels that Cracker Barrel isn't doing enough to draw younger diners, relying on the older regulars that will organically drop off over time. He sees the negative traffic trend continuing into next year, feeling that the stock won't bounce back until customers follow suit.

The silver lining with the stock at fresh 52-week lows this week is that it pushes the yield up to a record high. Cracker Barrel has a generous dividend, and it has come through with springtime hikes every year since 2010. The $1.25 a share quarterly payout translates into a yield of 3.5%. Cracker Barrel has also declared some hefty special dividends along the way. Turning things around will take some time, but patient investors will be rewarded with quarterly reminders of why they're sticking around. Diners will grow eventually, but for now, the growing distributions will have to do.