Often when we think of fast casual restaurants images of newer entrants supplanting older fast-food joints come to mind -- places like Chipotle and Panera. But fast-casual isn't necessarily for the new kids on the block. In fact, I think the best player in the dining niche is actually a company that's been around since 1969: Cracker Barrel (NASDAQ:CBRL).

While we could argue about the semantics of whether or not this should qualify as "fast casual," I'm going to focus more on the company's unique business model and its generous position on throwing cash back at its shareholders. 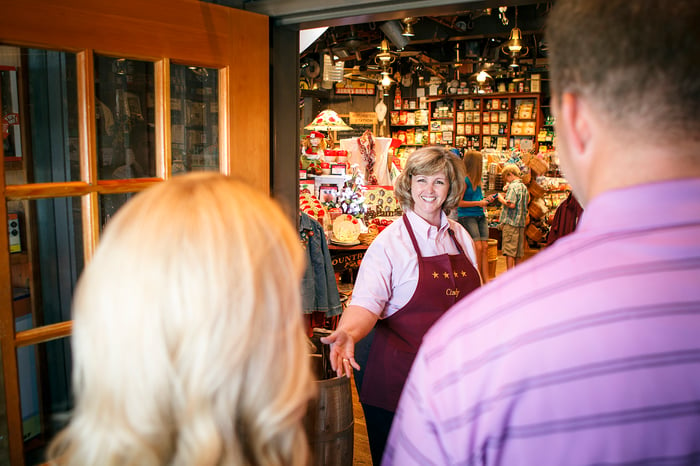 It's more than just a restaurant

One of the things setting Cracker Barrel apart from other chains is the fact that food is only part of how it makes money. Inside the stores -- 83% of which are located on interstate highways -- customers are encouraged to peruse gift shops and even consider buying one of the rocking chairs that adorn the porch outside the store. Believe it or not, those purchases can really add up, accounting for 20% of the company's revenue.

The atmosphere that Cracker Barrel is able to create in its stores -- with the aforementioned rocking chairs outside every location, and a warm fireplace on the inside -- has helped make it one of the most loved restaurants in America.

And while you won't find blazing growth rates from the company's base of roughly 650 stores nationwide, you also won't find the wild swings in traffic other restaurants have experienced over the past five years.

There's no denying that the most recent results aren't pretty. Again, however, the drops in restaurant sales -- which account for the lion's share of sales and profits -- is modest compared with most in the industry.

Management warned that this would be the case heading into the fiscal year, so none of this should come as a huge surprise. The key is this: right now, shares trade for 18 times both earnings and free cash flow, or a 25% discount to the S&P 500. Slowing growth has more or less been factored in.

If you look at what the typical finance page has to say about Cracker Barrel stock, you'll see that it offers a 3.2% dividend yield. That's not bad...but it also doesn't tell the whole story. In each of the past three years, the company has also offered up a special dividend.

In essence, management is showing that it is committed to returning all excess capital to shareholders. Here's a look at free cash flow and dividend payments since 2014, including the special dividends.

A chart like that might make an income investor a little wary: no one ever wants to see the dividend payments eclipsing free cash flow in a given year. But if you examine it, you'll see that large payments often followed years of booming free cash flow. In essence, management had extra cash on hand and used that excess to pay special dividends.

The effects on returns for investors have been marked. While the stock's overall return for the past three years has been impressive, the dividend has boosted that return by a wide margin. 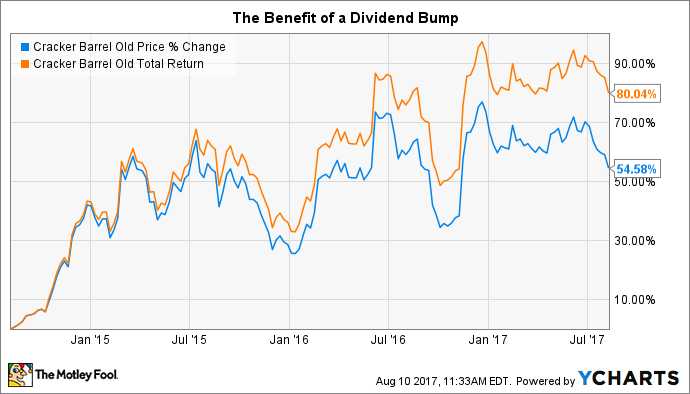 Personally, I don't own shares of Cracker Barrel, but that has more to do with the fact that I invest in wide-moat businesses that benefit from network effects or high switching-costs. Cracker Barrel doesn't have either of those.

At the same time, if you are an investor interested in a company that's offering up a solid 3%+ dividend, a history of solid performance even in tough times, and with the potential for more special dividends, I think Cracker Barrel could be the restaurant stock for you.