Cracker Barrel's (NASDAQ:CBRL) latest earnings report hastened the slide shares have been in since July. The reason? The company's outlook for the coming fiscal year disappointed investors despite rising sales and profits in the last 12-month period.

Cracker Barrel's country-style restaurants benefited from the wave of increased restaurant traffic the industry has enjoyed in the last couple of years. This was highlighted during the fourth-quarter and full-year report released on Sept. 14.

Revenue for the year rose 2% higher than last year to $2.91 billion. Part of the increase was the net four new restaurants in operation, bringing the company's location count up to 641 at the end of July, which is when the company's fiscal year ends. But much of the revenue growth came from comparable-restaurant and retail sales increases. So-called "comps" measure sales at locations that have been open at least a year. Comparable-restaurant and retail sales grew 2.2% and 2.7%, respectively, in the 2016 fiscal year.

The chain was focused on cost savings to drive profitability. Better food management and lower energy usage at restaurants helped fuel a $7 million reduction in operating expenses. Combined with the higher revenue, those savings led to an increase in profit as measured by earnings per share of $7.86, up 15% from 2015.

In tandem with this, the company paid out a total of $7.70 per share in dividends to shareholders. That includes a special $3.25 dividend announced back in June. Excluding the bonus check, investors got a normal dividend pay raise of 7% during the year.

It was a great year for Cracker Barrel and its investors. So, why the downbeat tone in the past few months?

First off, shares could have been in a slide after the special $3.25 dividend announced in June and paid in July. When dividends are paid, share prices tend to adjust to account for the company no longer having that cash. A little hiccup corresponds with that event, as you can see from the chart below. Cracker Barrel did this during the summer of 2015, as well, with a special $3.00 dividend. Note again the corresponding adjustment in share prices. 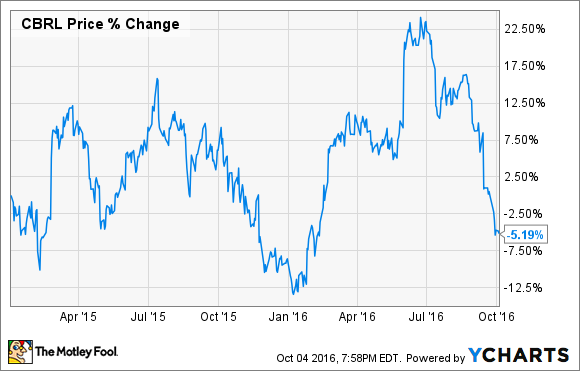 What it doesn't explain, though, is the continued fallout after the end-of-year earnings announcement. Despite rounding out a period of strong growth, investors were disappointed with the outlook for the 2017 fiscal year. Traffic growth started to slow late in the summer and that trend is expected to persist in the coming 12 months.

A bright spot in the outlook is the expectation that seven or eight new Cracker Barrels will be opened. Despite this development, though, management sees revenue only increasing to between $2.95 billion and $3 billion, an increase of 1.4% to 3.1%.

Earnings per share are also expected grow to $7.95 to $8.10 during the 2017 fiscal year. That would be a 0.5% to 2.5% increase over 2016. While profits on the rise are always a good thing, a best-case outlook of 2.5% growth pales when compared to the 15% growth rate investors just enjoyed. With that as a backdrop headed into the fall months, Cracker Barrel's stock has declined roughly 20% from July highs.

These developments don't mean current shareholders need to panic. The last 18 months have been a roller coaster, but this is to be expected. Investors are filtering through new information indicating Cracker Barrel is exiting a high-growth phase to one where cost savings and increasing cash payout is the new norm.

If you're looking for a high-octane restaurant that is aggressively expanding its service, Cracker Barrel may not be your game any longer. For those looking for long-term stability and a company that has shown its commitment to returning excess cash flow to investors, there's no need to jump ship at this point.