News swirled Monday of Michael Kors purchasing Versace for a price tag of more than $2 billion.

Shares of Michael Kors Holdings (CPRI 0.44%), designer and manufacturer of luxury apparel, footwear, and handbags, are down nearly 8% as of 2:14 PM EDT Monday after news broke that the company was close to completing a deal for Italy's Versace.

Monday, the U.S. fashion company was said to be near a deal for Italian fashion brand Versace for a price tag around $2.35 billion, according to a Wall Street Journal report. The move would give Michael Kors -- known for handbags costing less than $500 -- a strong anchor in high-end fashion, as Versace handbags start at roughly $1,500. Michael Kors' business had slowed in recent years because it was overexposed and had seemingly watered down its brand, resorting to discounts to sell its products. Since then, the company has repositioned its brand and focused on increasing the quality of its products, and Versace's high-end brand image will boost that -- and price points -- further. 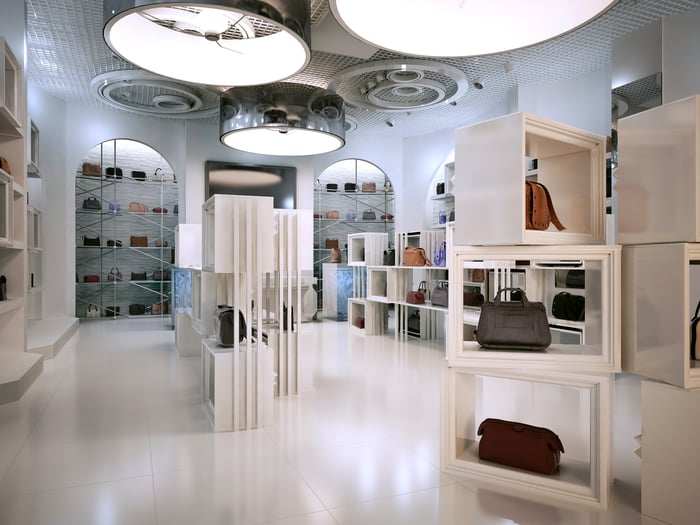 Although the Versace purchase price is likely at a significant premium, possibly why shares are moving lower Monday, the move fits with Michael Kors' 2017 $1.2 billion acquisition of Jimmy Choo, which helped drive strong first-quarter results and led management to raise full-year adjusted earnings-per-share guidance. When you combine big-name acquisitions with Michael Kors' efforts to rebrand its image and update its stores to a newer luxury concept, the long-term growth story is stronger Monday despite a stock price decline.