Three stocks that accomplished just that over the last 10 years are Exact Sciences (NASDAQ:EXAS), Align Technology (NASDAQ:ALGN), and NVIDIA (NASDAQ:NVDA). Here's how these stocks generated such impressive returns -- and if their tremendous momentum can continue. 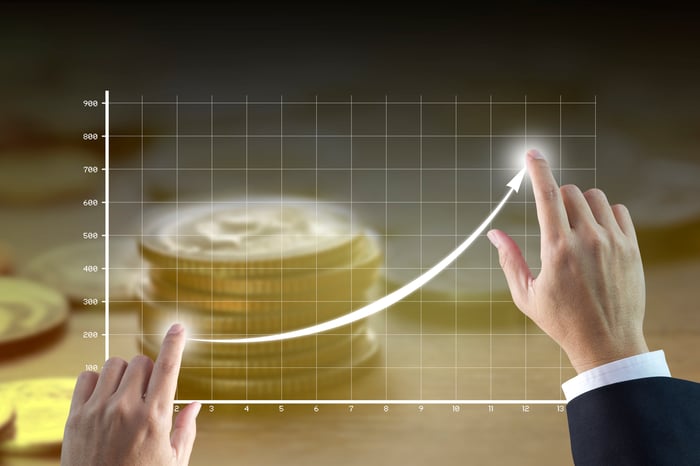 Exact Sciences has generated a return of roughly 9,160% over the last 10 years, enough to turn an initial $1,000 investment into more than $92,000. What's even more impressive is that the company made most of that amount since 2016.

Exact Sciences' revenue continues to skyrocket as more physicians prescribe Cologuard. There are a couple of reasons why sales could pick up even more in the future. Earlier this year, the American Cancer Society (ACS) lowered its recommended age for colorectal cancer screening from 50 to 45. If payers follow suit with revising their policies to cover screening at an earlier age, it should be huge for Exact Sciences.

The company could also receive a boost from its partnership with Pfizer announced in August. Pfizer's sales team will begin co-promoting Cologuard to physicians in the fourth quarter of 2018.

Align Technology's share price has soared 3,430% since September 2008. An investment of $1,000 back then would now be worth more than $35,000. Like Exact Sciences, much of Align's gains have been generated in just the last three years.

The company's Invisalign clear aligners have quickly captured a significant chunk of the orthodontics market, especially with adults. In the second quarter of 2018, Align posted record-high Invisalign sales -- just as it did in the first quarter and all four quarters of 2017.

Align also sells intraoral scanners, which are used to create 3D images of patients' teeth. These 3D images can then be used to develop treatment plans for Invisalign. Although the scanners segment generates only around 12% of Align's total revenue, it's actually growing faster than the company's Invisalign business.

The company has several paths to achieve future growth. One is to continue to expand into international markets. Another is to develop clear aligners that can treat more serious cases of malocclusion (the misalignment of teeth). Align's current addressable market for Invisalign is around 8 million orthodontic cases per year, but there are another 4 million cases each year that the company's clear aligners can't yet treat.

Investors who bought $1,000 worth of NVIDIA stock 10 years ago and held on now have a portfolio totaling more than $23,000 thanks to the stock's big gain of 2,240% during the period. And just like Exact Sciences and Align, the lion's share of those gains were made from 2016 forward.

NVIDIA's core business is developing graphics processing units (GPUs) for gaming. The gaming market continues to be the biggest growth driver for the company as demand increases for high-resolution games that require significant processing power.

Another massive market opened up for NVIDIA along the way, though. The company's GPUs turned out to be just the ticket for artificial intelligence (AI) applications. Many of the world's technology leaders now use NVIDIA's hardware for their AI data centers.

Both gaming and AI should continue to propel NVIDIA to even greater heights. One particularly promising AI opportunity for the company is in driverless cars. NVIDIA thinks that its addressable driverless car market could reach $60 billion by 2035.

Can they do it again?

It's possible that Exact Sciences, Align Technology, and NVIDIA could turn in equally impressive performances over the next 10 years. However, it's also unlikely. Few companies can sustain the kinds of gains these three have generated for extended periods of time.

That doesn't mean that these three stocks won't continue to be big winners, though. Exact Sciences, Align Technology, and NVIDIA all have significant opportunities to grow in the future. A $1,000 investment in each of these three stocks might not turn into $23,000 or more over the next decade, but there's a pretty good chance such investments will pay off nicely.