Pattern Energy Group Inc. (NASDAQ:PEGI) offers investors an impressive 8.4% yield. That sounds like a pretty rewarding way for income investors to invest in renewable power, which is the company's focus. In fact, it makes renewable-power peer Brookfield Renewable Partners LP's (NYSE:BEP) yield of 6.3% look small by comparison. But don't chase that higher yield until you read this, because you're likely to decide that Brookfield Renewable Partners, despite having a lower yield, is the better dividend stock.

Thanks, Mom and Dad

Both Pattern Energy Group and Brookfield Renewable Partners have parents that oversee them. This relationship is most clear in the case of Brookfield Renewable Partners, which is run by Canadian alternative asset manager Brookfield Asset Management (NYSE:BAM), its general partner. This giant asset manager, with more than 100 years of history behind it and roughly $290 billion in assets under management, basically oversees day-to-day operations, sources acquisitions, and even helps provide funding (it has a roughly 60% stake in the partnership).

Pattern Energy Group, meanwhile, is a funding vehicle for Pattern Development, which is a private company that builds wind and solar facilities. Essentially, Pattern Development builds a renewable-power project and then sells at least part of it to Pattern Energy Group so it can raise cash to build additional projects. (This is actually a simplification of a pretty complex relationship. Unless you are willing to dig in a little to understand the Pattern family, you should probably look for simpler investments.)

When all is said and done, the key takeaway here is that Brookfield Renewable and Pattern Energy are both heavily reliant on other companies for their growth, but in different ways. This is a vital fact to understand before you buy either of them. And it's what makes Brookfield Renewable the better income option today.

Slowing down vs. speeding up

In fact, during the second-quarter conference call, Pattern Energy specifically noted that it was "constrained" in its ability to issue additional shares. The end result is that it will be buying smaller pieces of the assets Pattern Development sells and recycling capital via the sale of portfolio assets. In other words, growth is likely to slow down. 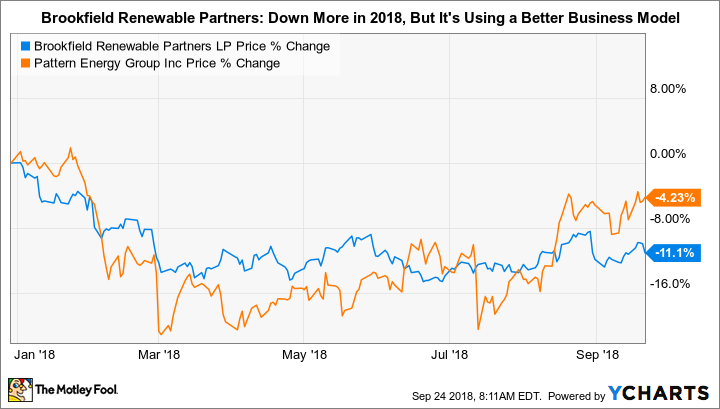 To be fair, these are completely logical choices given the circumstances. However, there's a longer-term issue for income investors to consider. After four years of regular quarterly dividend increases, Pattern Energy's dividend hasn't been increased since the fourth quarter of 2017. And management is only indicating that it believes it can continue to support the current payout -- so don't expect any hikes for a little while. Until Pattern Energy's stock price rises, the company's growth will continue to be "constrained." Yes, it might muddle through to better days, but it could be a very long slog. Meanwhile, inflation will be eating away at the buying power of the dividends investors are collecting.

There's one key statistic that investors will want to watch here: Pattern Energy's payout ratio. The goal is to get the payout ratio to 90% of funds available for distribution this year, with a longer-term goal of 80%. The company's guidance for funds available for distribution for 2018, however, ranges between $151 million and $181 million. Assuming the dividend remains unchanged, the high end of the guidance would lead to a 91% payout ratio -- right in line with the company's near-term goal. But the low end of the guidance range would leave Pattern Energy with a 109% payout ratio. Investors are likely to be leery of the stock until it works that payout ratio down, which could further prolong a share price recovery and the ability to issue stock to support growth. That, in turn, will complicate the company's ability to muddle through this period. It's a somewhat circular problem. 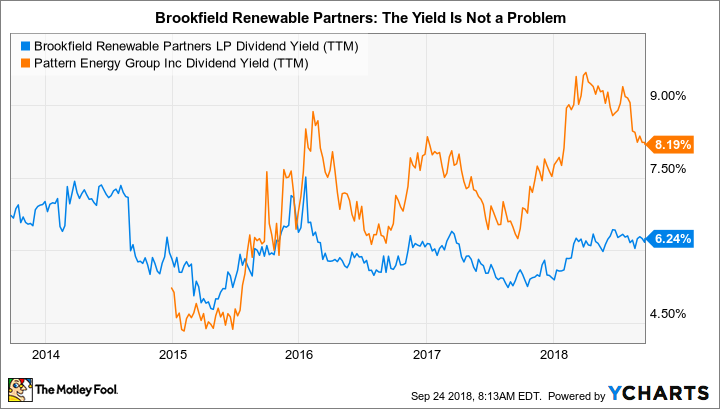 And, perhaps more important for income investors, the distribution keeps going higher. This year marks the ninth consecutive annual increase. Brookfield Renewable is still calling for future annual increases to run between 5% and 9%, which is in line with historical levels. The funds from operations payout ratio was about 74% in the second quarter, roughly in line with the partnership's long-term target of 70%. Sure, Brookfield Renewable has to find assets to buy, but so far, that hasn't been a problem, so there are no material headwinds on the horizon to fear. It's simply business as usual.

Sometimes a big yield isn't worth the risk

For more aggressive investors, buying Pattern Energy's high yield in the hope that it manages through this tough spell might be worth it. For most, however, the elevated payout ratio and the business model conflict caused by the high yield should be reason for concern. Brookfield Renewable Partners, despite a lower yield, is in a much better position to reward investors with business and distribution growth over time.