Revenue rose 12% to $915 million, driving net earnings 29% higher to $107.8 million. The company beat estimates on the top and bottom lines, marking the eighth consecutive quarter since its spinoff from Conagra Brands (NYSE: CAG) in November 2016 that it exceeded Wall Street's earnings forecasts.

The maker of french fries and other food products benefited from lower tax rates, which boosted earnings by $0.10 per share, while sales were bolstered by better price and product mix, though higher volumes helped, too. Those growth rates look solid, but can the stock run higher still?

Lamb Weston is the premier supplier of potato products to restaurants such as McDonald's (NYSE: MCD) and Yum! Brands' (NYSE: YUM) Taco Bell and KFC chains. It counts the top 100 U.S.-based chains as customers, but McDonald's represented 11% of Lamb Weston's revenue in its prior fiscal year, and its fries were behind Taco Bell's wildly popular Nacho Fries limited-time promotion this year, which helped push Yum!'s systemwide sales up 4% in the first quarter while contributing to the chain's 1% comparable-sales growth. Yum! said the Nacho Fries were the most popular product debut in Taco Bell's history.

In fact, it is the stiff competition among restaurants with their limited-time offerings that has been driving Lamb Weston's sales higher. Volume grew 5% last quarter, more than half of which was the result of LTO offerings in both the U.S. and internationally, and such deals play an important role in the company's long-range plans.

At the time of its spinoff, the potato processor commanded a 42% share of the North American frozen potato market, well ahead of rivals such as McCain Foods, J.R. Simplot, Cavendish Foods, and Kraft Heinz's Ore-Ida. Globally, it was reportedly second to only McCain, notching 23% of the market.

It sells products in more than 100 countries and has 24 manufacturing plants around the globe. Last year, Lamb Weston doubled capacity at its Richland, Washington, potato processing plant to 600 million pounds of frozen french fries per year. Another french fry plant, in Hermiston, Oregon, will add capacity for another 300 million pounds of fries per year, with the expansion expected to be completed by spring. That expansion is aimed at meeting demand in North America and Asia. 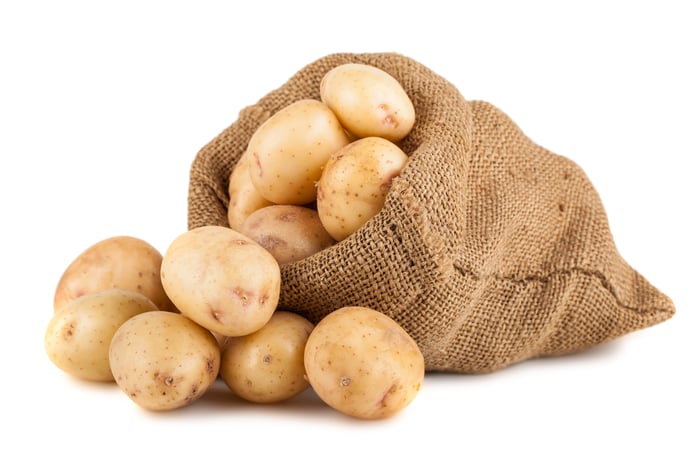 Lamb Weston's top line has benefited from strong pricing actions it started implementing last year. Sales to the food service industry rose 7% last quarter as a result, and it is looking for sales to continue rising in the mid-single-digit range because of price adjustments, particularly with the new capacity it has available.

According to Moody's, Lamb Weston's operating performance has only improved since separating from Conagra. The ratings agency upgraded the potato processor's debt ratings because it has reduced its adjusted debt-to-earnings before interest, taxes, depreciation, and amortization ratio from 4.6 to below 3.3 while increasing its retained cash-flow-to-net-debt ratio from 9% to 18%. Lamb Weston was able to reduce its leverage through strong earnings expansion, and paying down some of its debt helped, too.

While Lamb Weston's Ba1 rating from Moody's means the ratings agency considers its obligations "speculative and ... subject to substantial credit risk," Moody's says it would be willing to upgrade the french fry maker to investment grade if it continues on the path it's set on, though it would also need to achieve greater scale and diversity.

Poor potato crops can always wreak havoc on Lamb Weston's business. Last year, drought conditions in Europe caused input costs to rise, which impacted Lamb Weston's performance, but because there also tends to be about a one-year lag for when the full impact is felt, it is expecting costs to increase in the back half of the year.

Lamb Weston has largely been able to mitigate the impacts by raising prices and taking cost-savings initiatives, and there are additional price hikes coming over the next few quarters.

Meanwhile, the retail segment is growing as its Grown in Idaho initiative gains steam and market share. However, the company still faces higher transportation, warehousing, and manufacturing cost inflation.

Management remains upbeat on the prospects for the business, even as it comes up against some tougher comparables in the second half of the year. The foodservice and global segments are performing well, it has new capacity, pricing strength, and a retail segment that's beginning to take off. There doesn't seem to be any reason to think Lamb Weston's stock will become a hot potato.

Why Lamb Weston Stock Jumped 13.5% at the Open Today