Despite shrinking sales, one key metric moved in the energy services company's favor.

The energy markets have been extremely volatile, with prices of crude having climbed early in the year only to stall out recently. Although energy stocks fared well to begin 2018, companies such as offshore and land-based drilling services provider TechnipFMC (FTI -4.03%) have seen their ups and downs as conditions in the industry remain turbulent.

Coming into Wednesday's third-quarter financial report, TechnipFMC investors were prepared for dramatic revenue declines, but they hoped the company would be able to keep its bottom line stable. TechnipFMC didn't entirely succeed in meeting those hopes, but one key measure of its future business pointed to a possible turnaround. 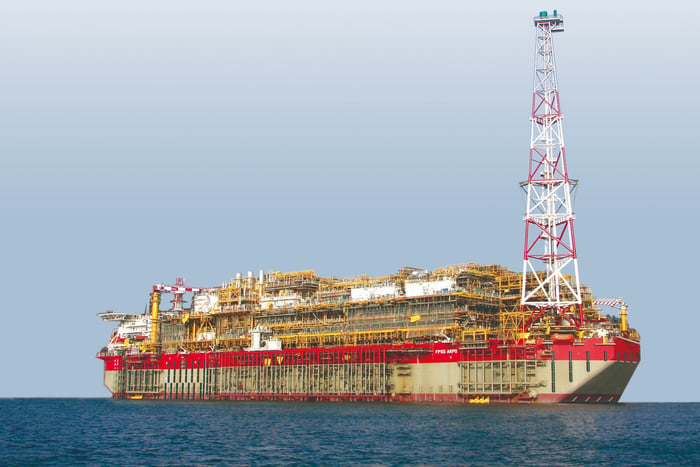 The latest from TechnipFMC

TechnipFMC's third-quarter financial results didn't look very strong. Revenue plunged 24% to $3.14 billion, which was even worse than the 22% drop that most of those following the stock were prepared to see. Adjusted net income also fell 24% to $139.8 million, and that resulted in adjusted earnings of $0.31 per share, far below the consensus forecast for $0.39 per share on the bottom line.

Most of TechnipFMC's segments had to deal with stiff headwinds. In the subsea area, revenue was down 18%, sending operating profit down by more than 22%. A big hit to margin played a key role in keeping the segment's bottom line under pressure, but also weighing on TechnipFMC's results was that key projects in Africa, Europe, and the Asia-Pacific region approached completion. Stronger competition affected the company's pricing power, and gains from merger-related synergies were able to recover only a portion of that lost profit. Vessel utilization fell slightly to 69%.

Things were a bit better in the onshore/offshore segment. Revenue plunged an even steeper 34%, but operating profit actually rose 18% from year-earlier figures. The company saw particularly strong gains in the process technologies business, and quicker-than-expected progress on the Russian Yamal liquefied natural gas project produced a bonus for TechnipFMC.

TechnipFMC's surface technologies segment once again stood out. Sales were up 14% from year-earlier figures, and operating profit rose 6%. More extensive activity in the North American market drove the unit's results.

CEO Doug Pferdehirt pointed to the efforts the company has made in internal operations. "Our third quarter results illustrate the benefit of structural cost savings and strong project delivery," Pferdehirt said, and the CEO pointed to solid execution and better operational performance as key drivers of forward progress.

Most encouraging for TechnipFMC were its backlog numbers. Inbound orders across the company jumped by nearly half, hitting $3.65 billion, and that contributed to a 9% rise in backlog to almost $15.2 billion. All three segments saw gains in backlog and order activity, and TechnipFMC still has confidence that strong demand in areas that include subsea drilling and exploration projects, unconventional production activity, and liquefied natural gas will be pillars of growth for the foreseeable future.

TechnipFMC's boosted some of its guidance for the rest of 2018. The company now sees total sales of $12.3 billion to $13 billion, with roughly $5 billion to $5.3 billion coming from the subsea segment, $5.8 billion to $6.1 billion coming from onshore/offshore activity, and $1.5 billion to $1.6 billion produced by the surface technologies business. Lower net interest expense and higher revenue in the onshore/offshore arena will help the company, while weaker margin figures in surface technologies will offset some of those gains.

Investors seemed reasonably comfortable with the results, and the stock climbed almost 5% in pre-market trading Thursday following the Wednesday night announcement. Even though it's trying to recover, TechnipFMC still has to prove that it can turn those inbound orders into actual revenue and profit before investors will feel completely confident that the energy services company is moving in the right direction.