Investors have had a lot of doubts about the industrial segment of the economy lately, with many worrying that a cyclical downturn is imminent. Trade-related tensions have also weighed on stocks like engine maker Cummins (NYSE:CMI), and even though strong results can come during the best of times, fears about what can happen when demand suddenly slackens has resulted in substantial declines for the stock in the past month.

Coming into Tuesday's third-quarter financial report, Cummins investors wanted some reassurance that the engine maker would be able to deliver good growth numbers. Cummins' results were even better than most had expected, and that gave many investors across the industry hope that worries about the industrial sector have been unwarranted. 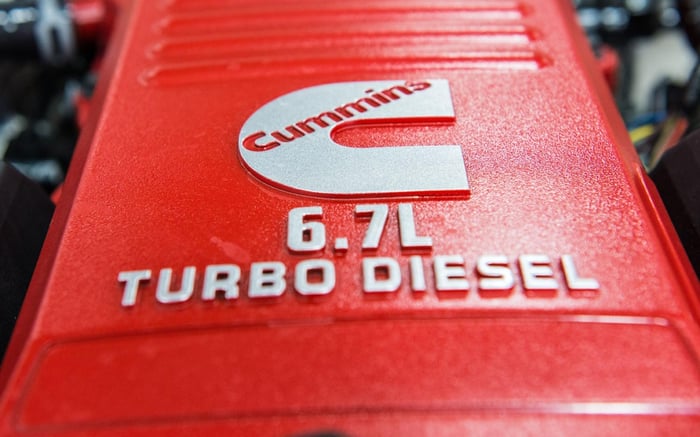 How Cummins revved up

Cummins' third-quarter results showed the success the company has seen lately. Revenue of $5.94 billion was up 12% from year-ago levels, almost exactly matching the consensus forecast among those following the stock. Net income jumped by more than half to $692 million, and even after accounting for some extraordinary items, adjusted earnings of $4.05 per share far exceeded the $3.76 per share that most investors were looking to see.

Cummins saw its best growth in the domestic market. North American sales were up 17%, reflecting the strength of the local economy. Meanwhile, Cummins saw growth of just 6% internationally, with the engine maker pointing to solid results in India, China, Latin America, and Europe to help generate those gains. Currency impacts related to the strong U.S. dollar weighed on global results, with a particularly outsized impact coming from the falling value of the Brazilian real.

From a segment perspective, Cummins saw fairly good results across the business. The key engine segment led the way higher for Cummins, posting 17% segment sales gains and watching pre-tax adjusted operating earnings soar by nearly half from year-earlier levels. In components, Cummins enjoyed 14% sales growth, although bottom-line gains were limited to just 11%. Power systems top-line gains were muted at just 5%, but a 47% jump in pre-tax operating profit reflected increased demand for power generation and the oil and gas markets. Cummins' distribution business also had good performance, with sales gains of 10% and pre-tax profit gaining at nearly a 30% rate.

CEO Tom Linebarger celebrated the news. "We delivered record earnings this quarter," Linebarger said, "due to increased demand in a number of key markets, growth in our market share, and the benefits of cost reduction initiatives." The CEO also pointed to Cummins' capital moves, which have included both dividends and stock repurchase activity.

Can Cummins pick up even more speed?

Cummins has high hopes for the future. The company just unveiled its PowerDrive suite of plug-in hybrid electric powertrain solutions at a recent trade show, and Cummins believes that the platform will be able to offer alternatives across the light-duty, medium-duty, and heavy-duty vehicle classes. Cummins also got named to the Dow Jones Sustainability North American Index for the 13th year in a row.

However, somewhat surprising was the fact that Cummins stood pat on its 2018 guidance. The engine maker still sees 15% to 17% revenue growth for the full year, and its projections for pre-tax operating earnings growth also remained unchanged from where they were in its last report. That's slightly disappointing given the bottom-line success that Cummins had during the quarter, but the company did say that it would have lower tax rates for the full year than it had previously anticipated.

Cummins investors seemed happy with the news, and the stock was higher by about 1.5% in pre-market trading following the announcement. With so much negativity among market participants in evaluating cyclical stocks, it won't take much good news to see a substantial rebound in the beaten-down space.