U.S. stocks finally got some respite on Tuesday from recent declines as earnings season moved toward its peak. The Dow Jones Industrial Average (DJINDICES:^DJI) and the S&P 500 (SNPINDEX:^GSPC) both finished sharply higher, regaining a portion of their losses from the past several days.

Among the stocks making the most news, Coca-Cola (NYSE:KO) gained ground following the release of its latest earnings report, while General Electric (NYSE:GE) fell after cutting its dividend and announcing disappointing results.

Shares of Coca-Cola rose 2.5% after the soft-drink maker posted encouraging results for the third quarter. Revenue was down 9% because of the company's ongoing bottler refranchising efforts, but on an organic basis, adjusted sales were higher by 6%, sending adjusted earnings per share higher by double-digit percentages. Coca-Cola reported especially strong volume growth in Coca-Cola Zero Sugar, as well as the Fuze Tea and Smartwater brands.

Yet what got even more attention from investors was Coca-Cola's apparent decision not to pursue coming out with a cannabis-infused line of beverages. Speculation had run rampant in recent months that Coca-Cola might look to establish a partnership with Aurora Cannabis (NASDAQ:ACB), but Coke CEO James Quincey stated that it has no plans to enter the cannabis drink space. Indeed, even the beverage giant's foray into alcoholic beverages in the Japanese market hasn't prompted plans for a global strategic shift. Coca-Cola seems content to move forward with more traditional beverages, and as it pivots toward the healthier habits that consumers have adopted, investors are warming to the idea that the company best known for sugary soft drinks might well be able to transform itself successfully. 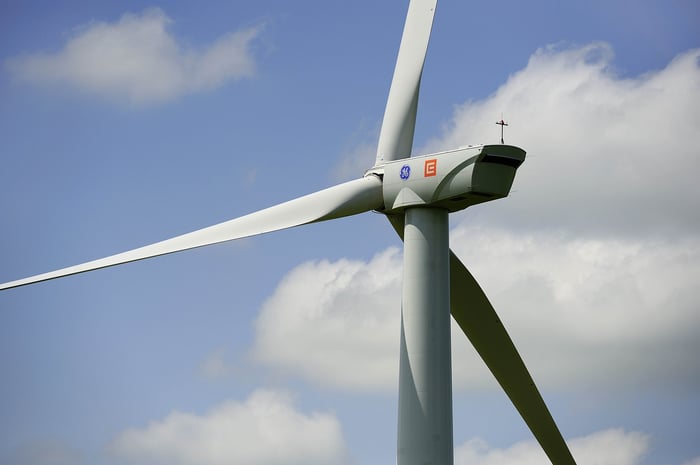 Meanwhile, shares of General Electric finished down sharply, closing lower by 8.9%. After having been unceremoniously kicked out of the Dow earlier this year, the conglomerate announced today that it would again slash its quarterly dividend, this time from $0.12 per share all the way to $0.01.

The move was part of a package designed to strengthen GE's balance sheet. The company also said that it would split its GE Power unit into two pieces, one to concentrate on natural gas while the other focuses on steam, nuclear, electric grid, and power conversion. Yet the move also involved a massive $22 billion charge that has drawn scrutiny from the Justice Department, and even excluding that extraordinary item, earnings were down by a third compared to year-earlier figures. In a market that's already turbulent, investors don't have much patience for companies going through difficulties of their own -- even when they're among the oldest businesses in the nation.