Please ensure Javascript is enabled for purposes of website accessibility
Log In Help Join The Motley Fool
Free Article Join Over 1 Million Premium Members And Get More In-Depth Stock Guidance and Research
By Daniel B. Kline – Updated Nov 5, 2018 at 6:11AM

The company is testing new ideas that make it much more than a retailer.

Walmart (WMT -2.50%) has been steadily evolving how its stores operate -- sometimes in very innovative ways -- but the core store has stayed largely the same. The retailer's locations are big boxes with huge parking lots. In some cases, the chain shares a plaza with other retailers and in others, it's its own sort of shopping oasis.

Now, however, the chain has a radical new vision. It's testing a new concept called "Walmart Reimagined" that makes its stores part of a broader town center concept. "It's the Walmart experience you've come to expect and so much more. It's Green Space, Food, Beverage & Entertainment all in one location," the company explained on a website devoted to the project.

The reimagined centers would have features like fitness centers, open space, food trucks, and even playgrounds. There would be sites for other businesses to operate -- some in the "town center" others actually inside the Walmart store -- and what Walmart calls a Container Park where "vendors have an opportunity to be immersed in the community through easily accessible storage container based facilities." 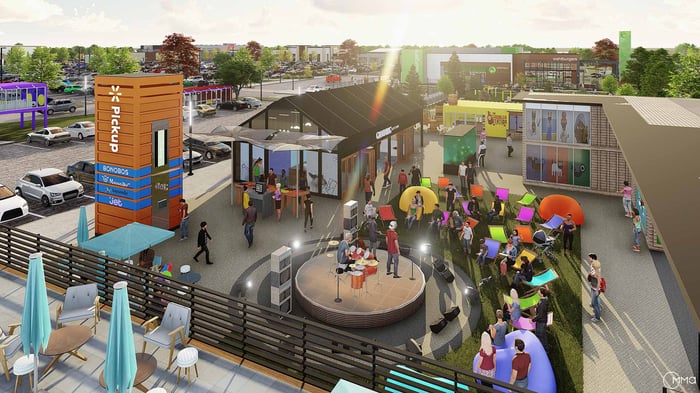 Walmart is thinking very bold with its town center idea as shown in this conceptual image. Image source: Walmart.

Walmart has eight sites in eight states under development using at least pieces of this concept. There won't be one "Walmart Reimagined" model. Instead, each site will be customized to serve the needs of the community it operates in.

"This concept could work for the new demographic that Walmart seems to be targeting with their digital transformation," Teradata executive Dave Nixon commented on a Retailwire story about the concept." The key to success on any level will be the laser focus on location, supporting activities, and experience that is designed for a specific targeted demographic."

Walmart's concept is in line with the demands of younger consumers who may leave the city for a suburban environment but still want walkable, city-style amenities. The challenge for the brand may be how the kind of shopper looking for this type of offering perceives Walmart.

"While this strategy aligns with what I believe will be the very near future of retail, I do wonder if the typical Walmart customer is the ideal target for this town center concept," commented Aptos Marketing Director Dave Bruno on the same RetailWire story. "I have not seen evidence that the Moosejaw and Bonobos acquisitions have significantly moved the needle in changing their customer base, and without those Millennials, I am not sure this strategy will succeed."

In recent years, really since it bought Jet.com in 2016, Walmart has been very open to experimentation. It has tried a lot of ideas, dropping some and expanding others while constantly pushing boundaries.

A Walmart-based town center may not be what some customers think they want, but if the company executes well, it may capture those shoppers anyway. This is an idea that's in the very early stages, but it shows that the company understands that the so-called retail apocalypse isn't the end of major change in the retail space.

In many suburban areas, Walmart is already a de facto town center without any of the associated amenities. Walmart Reimagined could formalize that while bringing added value to the communities the retailer serves. That's not going to be an easy transition, but it's one that the company should be able to make if it continues to experiment, adjust, and listen to its customers.