Shares of Continental Resources, Inc. (NYSE:CLR) plummeted in October, falling 25.2% for the month, according to data provided by S&P Global Market Intelligence. Driving the downdraft in the oil producer's stock was a slump in crude prices, which offset several notable positives during the month. 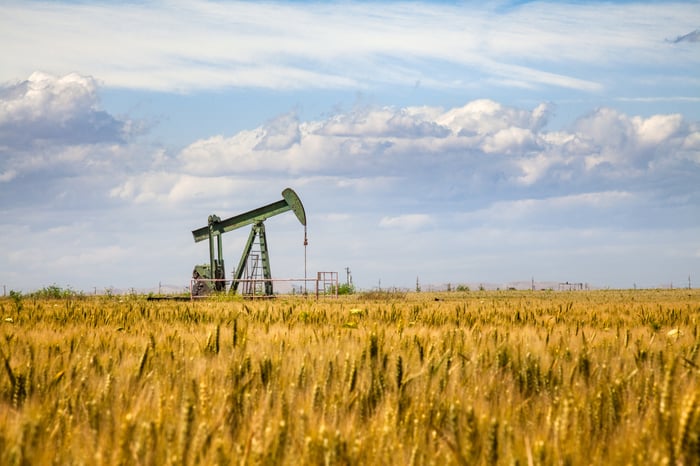 Before October's plunge, Continental Resources had rallied more than 30% on the year. That rebound led BMO Capital to downgrade the oil stock last month from outperform to market perform, though it did boost its price target from $65 to $73 per share. Driving the downgrade was BMO's view that the company's valuation had gotten a bit rich after rallying nearly nonstop for most of the year.

However, with that rally fading, several analysts took that as an opportunity to upgrade the stock as the month wore on. Seaport Global, for example, boosted its rating from neutral to buy while jacking up its price target from $64 to $75 per share. Seaport noted that the recent pullback in the stock was a compelling entry point, especially given the company's outsized production and cash flow growth through 2020. Wells Fargo, meanwhile, resumed its outperform rating on the stock while setting a $78 price target due to the company's strong medium-term oil production growth and free cash flow potential.

Those positives were on full display when Continental Resources reported its third-quarter results at the end of the month. The company recorded $0.90 per share in adjusted earnings, which was $0.08 per share ahead of the consensus estimate. Driving that better-than-expected result was a 23% surge in production from the Bakken, which set a new quarterly record. Meanwhile, the company is on pace to generate $1 billion in free cash flow this year, which puts it on track to achieve its debt reduction target in 2019.

Oil took a nasty spill last month and pulled Continental Resources' stock down with it. That sell-off, however, makes shares look much more appealing, especially given the growth in both production and cash flow the company has coming down the pipeline.