After three consecutive quarters of falling engagement, is the free-to-play battle royale game to blame?

With a momentous run going back five years, it was inevitable that Activision Blizzard (ATVI 1.34%) would pause for a breather. During the recent market adjustment, the stock gave up its 30% gains from earlier this year, leaving it flat for 2018. Investors were counting on the recent debut of Call of Duty: Black Ops 4 to reignite the company's ascent, but declining users and renewed fears about Epic Games' Fortnite phenomenon appear to be taking a toll.

For the third quarter, Activision reported revenue of $1.51 billion, down 7% year over year. Net bookings of $1.66 billion were in line with analysts' consensus estimates, while topping management's forecast of $1.49 billion. Adjusted earnings per share of $0.52 also topped expectations of $0.50. 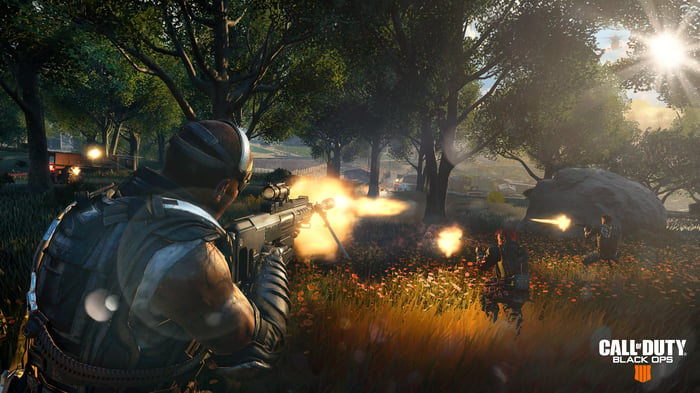 Activision suffered from flat to falling sales, which spooked investors. Revenue from digital channels was $1.28 billion, down 4% year over year, while digital net bookings fell 2% to $1.44 billion. If there was good news, Activision was able to keep its costs in check, which helped the bottom line, as expenses fell 8% year over year.

Activision boasted of deep engagement, saying players spent a record 52 minutes per day in Activision, Blizzard, and King games in the quarter.

Building on the company's esports momentum, Activision announced that the Overwatch League had sold rights to an additional six teams in September, with significantly higher buy-ins than the initial lot of teams. This brings the total roster to 20 teams for the upcoming season.

The company had 345 million monthly active users (MAUs) during the quarter, distributed throughout its various segments. King, home of the highly popular Candy Crush Saga mobile game series, reported 262 million MAUs. Blizzard Entertainment, which hosts the World of Warcraft franchise, had 37 million MAUs, while the Activision segment, home of the Call of Duty franchise, accounted for 46 million MAUs. It's important to note that management's pronouncements aside, this is the third consecutive quarterly loss in MAUs, which have fallen from 385 million in Q4 2017 to 345 million in Q3 2018 -- a decline of 12% year over year. The falloff of users began shortly after privately held Epic Games released Fortnite Battle Royale, in late September 2017. The last-person-standing survival game quickly became a worldwide phenomenon. Executives of all the major game publishers talked in hushed tones for months, wondering if the free-to-play game was siphoning off players' time and money from traditional console titles. While many believe Fortnite's run has lost steam, Activision's latest results and its continuing decline of monthly users are sure to reignite that debate.

Investors simply weren't impressed with Activision's guidance for the upcoming fourth quarter. The company forecast revenue of $3.05 billion, up 15% year over year, and coming in below analysts' consensus estimates of $3.06. The estimate for profits also came up short, as Activision is anticipating adjusted earnings per share of $1.06 per share, far below the $1.34 expected by analysts.

Investors were looking for reassurances that Activision growth would resume, but none came, and the stock sold off as much as 12% on Friday following the report. The combination of the uninspiring guidance and the continuing decline in MAUs is sending some shareholders to the exits. It remains to be seen if this is a temporary situation, or if Activision has a longer-term problem on its hands. Until investors have more clarity, the company will likely remain under pressure.