Investors dumping shares of the logistics giant are missing the big picture.

XPO Logistics (XPO -2.27%) was crushing the S&P 500 in the third quarter when October slammed the brakes on its run-up so hard that the stock ended the month down 21.7%, according to data provided by S&P Global Market Intelligence, even hitting its lowest point in the year so far. There has been no respite yet, what with the freight and logistics giant tumbling another 11.5% so far this month as of this writing.

While XPO's steep fall in October can largely be blamed on the broader market and industrials sector pullback, the impact of an unexpected shock from the company on Oct. 31 is spilling over this month. 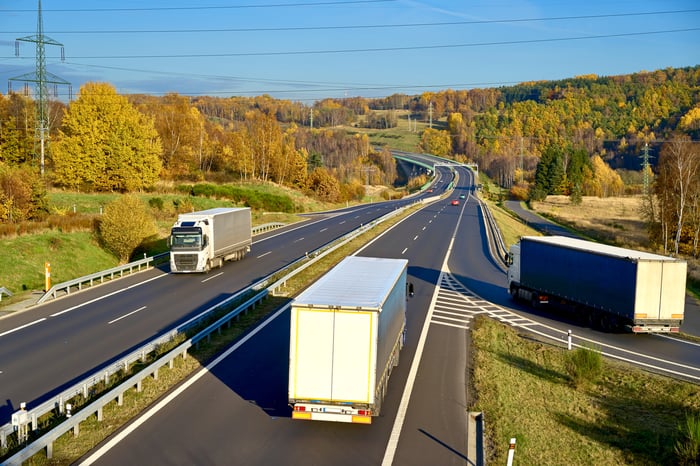 Strong freight activity propelled XPO shares higher in recent months, but the market volatility in October was bound to hit the company, whose fortunes are tied so closely to the health of the economy. The market eagerly awaited strong quarterly numbers from XPO to abate some of the fears.

In fact, Bank of America Merrill Lynch even upgraded its rating on the stock on Oct. 30 from neutral to buy on several grounds, including diversified business lines, an improving less-than-truckload business, deleveraging, and potential acquisitions. But much to investors' chagrin, XPO cut its guidance for the full year on Oct. 31.

To be clear, XPO's Q3 numbers were far from disappointing. Its revenue climbed 11.5%, and earnings jumped nearly 68% year over year to $0.74 per share. However, the company's adjusted earnings fell fairly short of estimates, as it took an after-tax hit of $11.4 million related to a customer bankruptcy. As a result, XPO cut its full-year adjusted EBITDA (earnings before interest, tax, depreciation, and amortization) forecast to $1.585 billion from $1.6 billion.

The sell-off in XPO appears overdone, and I believe investors have simply been taking some profits off the table amid macro concerns after the stock's solid rally since the beginning of the year through September. The company bagged new business worth $918 million in the third quarter and is aggressively looking at potential acquisitions. With the holiday season also just around the corner, XPO should have a busy time ahead fulfilling deliveries for offline and e-commerce businesses alike.