Shares of Amazon have lost about a quarter of their value since the beginning of October.

Shares of e-commerce and cloud-computing company Amazon.com (AMZN -1.57%) fell sharply on Monday. The stock ended the trading day down about 5.1%. 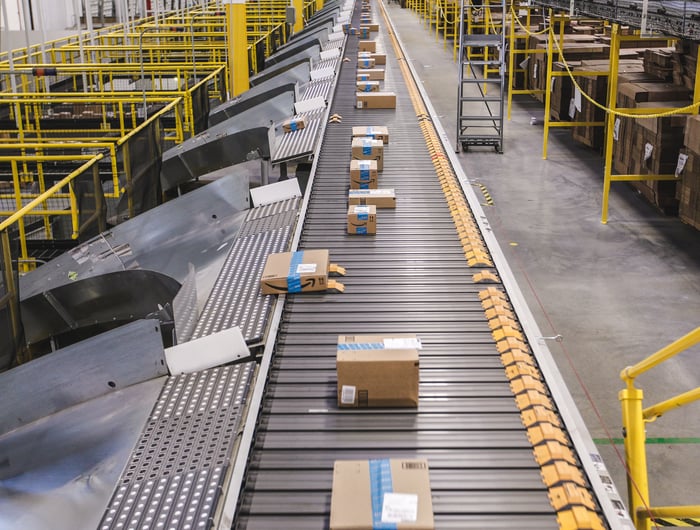 Highlighting the pullback in tech stocks, the tech-heavy Nasdaq Composite declined 2.7% on Monday -- worse than the S&P 500's 1.5% decline. This extends a broad sell-off in tech stocks that started gaining momentum in early October. Investors seem less willing to risk money on stocks with pricey valuations.

Amazon, Facebook, Netflix, and Alphabet are trading lower on Monday primarily due to market headwinds. But bearishness toward Apple on Monday was likely magnified by yet another rumor that the tech giant is cutting production orders for its new iPhones.

Amazon's decline on Monday puts shares down about 25% since the beginning of October. The stock's decline during this period has been fueled both by a sell-off in tech stocks and Amazon's worse-than-expected revenue guidance for its fourth quarter.

Turning to the e-commerce giant's fundamentals for some clarity amid this volatility, Amazon's third-quarter net sales and earnings per share came in at $56.6 billion and $5.75, respectively -- up significantly from $43.7 billion and $0.52 in the year-ago quarter. However, the company's guidance for fourth-quarter net sales of $66.5 billion to $72.5 billion failed to impressed investors. This implies 10% to 20% year-over-year growth, down from sales growth of 29% in Q3.