The stock market is taking a beating. Since Oct. 1, the S&P 500 and tech-heavy Nasdaq indexes are down 8.8% and 13.3%, respectively, through Nov. 21. Many highly valued stocks, particularly in the tech space, have been hit much harder. 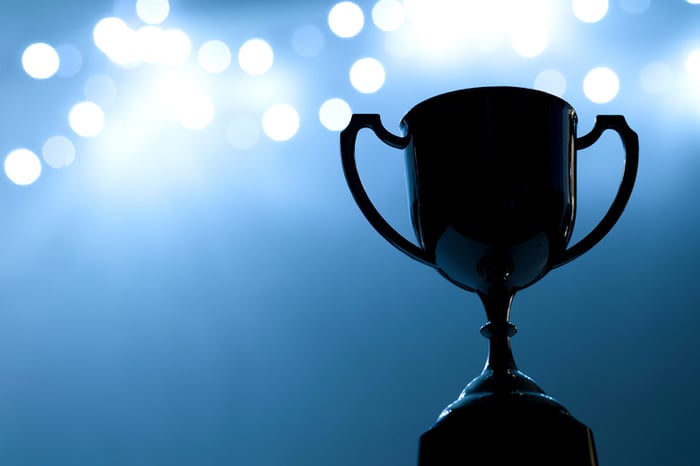 Since Oct. 1, shares of Innovative Industrial Properties (IIP) and American Water have outperformed the S&P 500 by more than 16% and 13%, respectively, and have beaten the Nasdaq by even greater percentages. 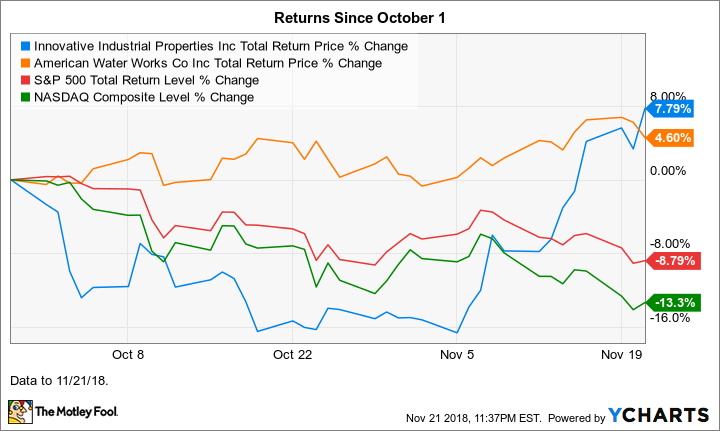 Both these stock are dividend payers, which isn't surprising as many investors flock to safety in times of market downturns and volatility. All other things being equal, dividend stocks are generally considered to be less risky than nondividend payers. (Though that's not true when it comes to very high-yielding dividend stocks.)

There are several notable differences, however. IIP has only been in business and publicly traded for two years, whereas American Water has been in existence since the late 1800s. IIP stock is a small cap, whereas American Water stock is a large cap. And the regulated water utility industry is one of the lowest-risk and lowest-volatility industries, while the marijuana sector is quite risky and volatile. 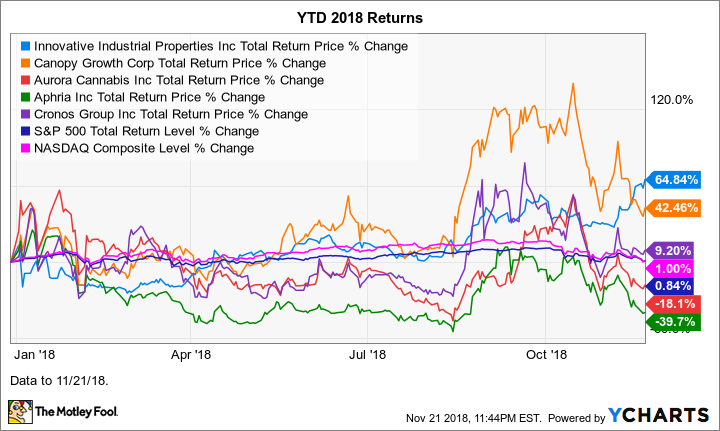 Data by YCharts. So far in 2018, IIP stock has outperformed four of the largest pure-play marijuana stocks by market cap (Canopy Growth, Aurora Cannabis, Aphria, and Cronos Group) that have traded on a U.S. exchange throughout 2018. Tilray is not included as its initial public offering on the Nasdaq was in July.

The first thing a potential investor in Innovative Industrial Properties should know is that it's organized as a real estate investment trust (REIT). This corporate structure is to thank for the stock's solid dividend, currently yielding 2.9%. REITs are required to pay out at least 90% of their income as dividends in exchange for their preferential tax treatment.

IIP buys properties within the states in the United States where medical marijuana is legal, and leases them to cannabis growers. This financing service is particularly valuable because companies directly involved with marijuana often have a difficult time obtaining funding from traditional sources because cannabis is illegal on the federal level in the U.S.

Currently, Innovative Industrial Properties owns 10 properties, all of which are leased. It uses long-term, triple-net leases (tenants pay  property taxes, insurance, and maintenance), with built-in annual rent increases, which results in a quite predictable income stream. Unlike most marijuana companies, IIP is profitable, which makes it a less risky way to get exposure to the fast-growing cannabis space. Earlier this month, it released strong third-quarter results. Revenue soared 152% year over year, earnings per share (EPS) surged 133%, and adjusted funds from operations (akin to "earnings" for REITs) jumped 81%. 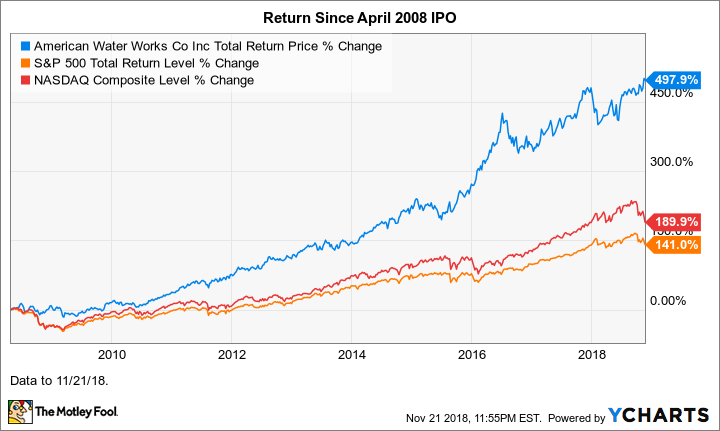 American Water is the largest publicly traded water and wastewater utility in the U.S. It operates in 47 states -- 16 of them as a regulated utility -- and Ontario, Canada. Its regulated business accounts for the lion's share of its revenue and earnings, but it also has several market-based businesses. These include building and operating water systems for military bases throughout the country and supplying water and related services to natural gas exploration and production companies in the Appalachian Basin.

American Water's competitive advantages relative to its peers stem from its size and geographic diversity, both of which are tops among the industry in the U.S. Its size provides it with more resources than its peers to make acquisitions, while its broader geographic footprint means its has greater opportunity to efficiently expand by acquisition.

For the first nine months of 2018, American Water's EPS adjusted for one-time items jumped 11.5%. Wall Street analysts expect the company to grow earnings at an average annual rate of 8.2% over the next five years.

In short, American Water Works makes for a solid long-term holding, while Innovative Industrial Properties is worth watching.