Please ensure Javascript is enabled for purposes of website accessibility
Log In Help Join The Motley Fool
Free Article Join Over 1 Million Premium Members And Get More In-Depth Stock Guidance and Research
By Danny Vena - Dec 1, 2018 at 10:50AM

Announcements from the e-commerce giant are getting to be something of a broken record.

For longtime followers of Amazon.com (AMZN -1.98%), this may have something of a familiar ring. The e-commerce giant announced a record-breaking holiday shopping weekend for the five-day period beginning with Thanksgiving and ending with Cyber Monday, which the company refers to as "the Turkey Five." Amazon said U.S. customers purchased millions more products over the holiday weekend than in the same period last year. In a press release commemorating the achievement, Amazon said customers purchased more than 180 million items during the five-day sale and ordered more than 18 million toys and 13 million fashion items on Black Friday and Cyber Monday combined.

Amazon also said Cyber Monday was "once again the single biggest shopping day in the company's history." If this all sounds vaguely familiar, it should, as Amazon made similar announcements in the wake of last year's Thanksgiving weekend. Let's pick through the announcement and see what other worthy accomplishments stand out. 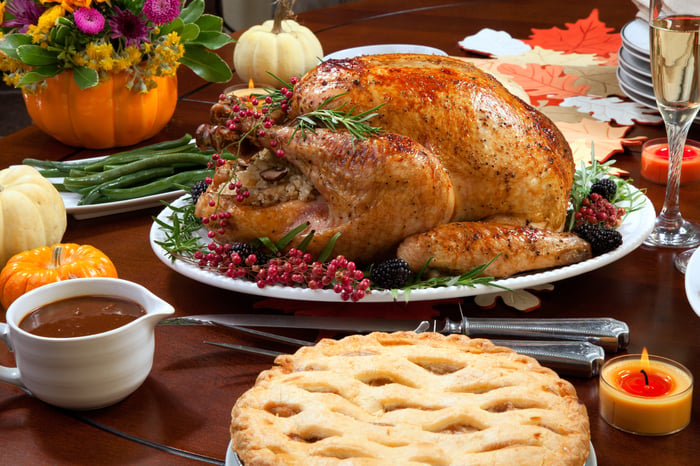 Some of the other benchmarks the e-commerce juggernaut announced are things that investors have come to expect. Customers purchased a record number of Amazon-branded devices globally over the five-day period. It was, in fact, the "[b]iggest holiday shopping weekend ever for Echo devices." The No. 1-selling device across all categories on Amazon was the Echo Dot, holding on to the title it captured during last year's sale, as well as during Amazon's most recent Prime Day, the customer-appreciation sale held each July.

It isn't a coincidence that Echo products are among the biggest sellers. The devices were heavily discounted to encourage customers to take the plunge. Echo owners tend to be among the most lucrative of Amazon's customers, spending 66% more than the average customer, according to research from Consumer Intelligence Research Partners.

More than just the Echo

In addition to the Echo Dot, best-selling products included the Fire TV Stick 4K With Alexa Voice Remote and the Fire 7 Tablet With Alexa. It was also a record-setting weekend for smart-home devices, including Amazon's Ring Video Doorbell 2, the iRobot Roomba 690 Robot Vacuum, the TP-Link Mini Wi-Fi Smart Plug, and Amazon's own Smart Plug. The company revealed that both its Ring doorbell and its Blink home security cameras doubled their sales volume from the prior-year period. The Fire TV was also a big hit, and Amazon said it is the "#1 streaming media player family in the U.S., U.K., Germany, and Japan, across all retailers."

While nothing is certain but death and taxes, Amazon typically has a robust quarter whenever the company announces another "record-breaking" sales event. Amazon investors seemed unnerved by the company's rare top-line miss when it reported its third-quarter results last month. I pointed out at the time that while revenue was just shy of analysts' consensus estimates, it was near the high end of the company's forecast.

For the current quarter, Amazon is guiding for revenue growth of between 10% and 20% from the prior-year quarter. If the company's post-Thanksgiving Day sale is any indication of the demand it can expect this holiday season, Amazon should have no problems topping what is likely to be a conservative forecast.