This big-box retailer offers both growth and income, and it's selling at a discount.

Today's stock market is arguably riskier than it has been at any point since the Great Recession.

The S&P 500 has lost more than 5% in the fourth quarter as concerns about rising interest rates, tensions with China, and an aging bull market have combined to cool off stocks. Meanwhile, there are signs that the housing and auto markets are slowing, which are often leading indicators of a recession.

The long-reliable FAANG group of tech stocks is flopping, a sign that investors would be mindful to look to a safer corner of the market, and one stock that offers a unique combination of growth, value, income, and reliable profits is Target (TGT 0.53%).

The brick-and-mortar retailer may look like an odd suggestion with the rising threat of e-commerce and Amazon, but Target has made a number of smart moves over the last year that make it well-positioned for future growth. It's also cheap at a P/E of just 13.5 after falling 16% over the last month, and it offers a dividend yield of 3.8%, counting itself among the ranks of the S&P 500 Dividend Aristocrats. Let's take a closer look at why Target looks like a smart buy today. 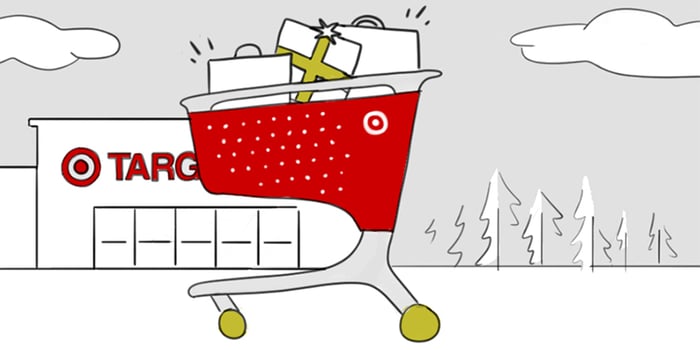 Target's top line is growing faster than it has in more than a decade. The "cheap chic" chain posted 6.5% comparable sales growth in the second quarter, its fastest clip since 2005, and followed that up with a jump of 5.1% in the third quarter. The growth was broad-based as the company saw surges in both in-store traffic as well as digital sales, which rose 49% in the third quarter.

At a time when other big-box chains are closing stores or even going bankrupt, Target's roaring comparable sales growth signals that the company is executing as effectively as it has in recent memory, both with its digital initiatives and with its in-store renovations and improvements. The company also sees that momentum carrying into the key holiday quarter, calling for 5% comparable sales growth in the fourth quarter, tracking with its full-year target.

Over the last year, Target has made a number of clever moves that have significantly improved the company's position. About a year ago, it acquired Shipt, the Instacart competitor, to help it enable same-day shipping from its network of more than 2,000 stores. To date, Target has Shipt providing same-day delivery from more than 1,400 stores.

It's also opening new, small-footprint stores in cities and college towns to tap an underserved market that is looking for convenience, a wide selection, and competitive prices, a need that Target is well-suited to meet.  It's also sprucing up its current store base, remodeling 300 stores this year, which have delivered incremental comparable sales of 2% to 4%. The company expects to remodel another 600 over the next two years.

Finally, the retailer is doubling down on the holiday season with a revamped toy department and a wider selection of toys in order to capitalize on the Toys R Us bankruptcy. To capture sales during the peak season, Target is also offering free two-day shipping on hundreds of thousands of items with no membership fee or order minimum, a unique proposition this holiday season. In addition, the company has a number of other convenient pickup and delivery options to make online shopping easier than ever before.

In addition to the Toys R Us bankruptcy, Target also looks poised to benefit from the challenges that a number of other retailers are facing -- the company's middle-class positioning, broad selection across multiple categories, and nationwide footprint means it competes with a wide range of retailers. That also makes it a convenient substitute for consumers as struggling rivals close up shop. Target is likely to grab share from companies like Sears, which continues to unravel following its October bankruptcy, Bon-Ton, the department-store chain that declared bankruptcy earlier this year, and struggling retailers like J.C. Penney and Bed, Bath & Beyond, which are both giving up market share.

Brick-and-mortar retail is undergoing a bifurcation as stronger chains like Target are poised to continue thrive while a slew of other chains recede into irrelevance. As that plays out, Target looks set to be a winner. The next recession could drown a whole sea of struggling retailers, which would set up Target to grab market share and grow sales as the economy recovers.

Beyond the arguments above, there is one key concern that investors have. Despite the strong sales growth this year, Target's operating income has actually fallen through the first three quarters of the year, and a 90 basis-point drop in gross margin was a key reason for the sell-off following its third-quarter earnings report. Management has pointed to higher digital fulfillment costs as the main reason for the gross margin drop, but CEO Brian Cornell addressed the operating margin concerns, saying on the recent earnings call, "We believe that this year will establish a sustainable benchmark for our operating margin rate over the longer term, as we achieve a balancing point between the rate pressures and opportunities of operating an omnichannel retail business."

Indeed, capital expenditures have been elevated this year, up 40% as the company makes investments in Shipt, online pickup capabilities, and store remodels. As that cost plateaus, operating margin is likely to stabilize.

Assuming operating margin stops contracting and the company begins to show operating profit growth, the stock should respond accordingly, as it's clear Target's customers approve of its recent initiatives.

With the stock down 20% over the last two months, shares could gain almost 25% simply be recouping those losses, which could easily happen with a strong holiday quarter. Beyond that, Target looks well-positioned for further growth, and its near-4% dividend yield should keep investors content to be patient if need be.

In today's volatile market, Target looks like a great stock to buy now.