A look at benchmarks that will help determine the company's performance.

Mastercard (MA -0.28%), the global card-payments processing network, has enjoyed a stellar year so far, as double-digit revenue and earnings expansion have been reflected in year-to-date share price appreciation of more than 32%. Can the card giant continue to win laurels from investors in 2019? Below are four vital metrics that will help determine the company's financial performance, and either support or undermine further stock gains.

At some point in 2019, Europe will overtake the United States as Mastercard's second-largest provider of gross dollar volume (GDV) among Mastercard-branded cards. It may potentially also surpass the current largest segment by GDV: Asia-Pacific, Middle East, and Africa (APMEA).

Europe's total year-to-date GDV of $1.28 trillion trails both APMEA GDV of $1.34 trillion and U.S. GDV of $1.30 trillion over the same period. Yet its growth is outpacing that of the two larger regions.

In the first three quarters of 2018, European GDV expanded by approximately 20% over the prior year -- more than double the U.S. GDV growth rate of 9.5%, and 5 percentage points higher than APMEA's 15% growth. Because of this faster pace, Europe has contributed more dollar growth to GDV than either region this year, adding $215 billion in volume, versus $175 billion in APMEA and $114 billion in the U.S.

For now, Europe is Mastercard's most nimble volume region. A spate of partnerships over the last few years has expanded the company's reach considerably. Recent deals include winning the majority of the debit and credit card portfolios of Spain's Bankia, and an expansion of the company's business with payments platform PayPal in Europe. Mastercard was also recently named as home furnishing giant Ikea's credit co-brand partner. As goes Europe, so goes Mastercard's ability to exceed 2018's volume growth next year.

An often overlooked metric for measuring Mastercard's progress is the rate at which its customers issue cards. Despite ongoing evolution in payments technology, volume growth for card networks still depends upon issuance and, ultimately, cardholder use.

Mastercard ended the third quarter with 2.5 billion Mastercard and Maestro-branded cards issued in total by its customer institutions (adjusted for the company's fourth-quarter 2017 deconsolidation of its Venezuela operations). This represents trailing-12-month growth of roughly 4.2%. 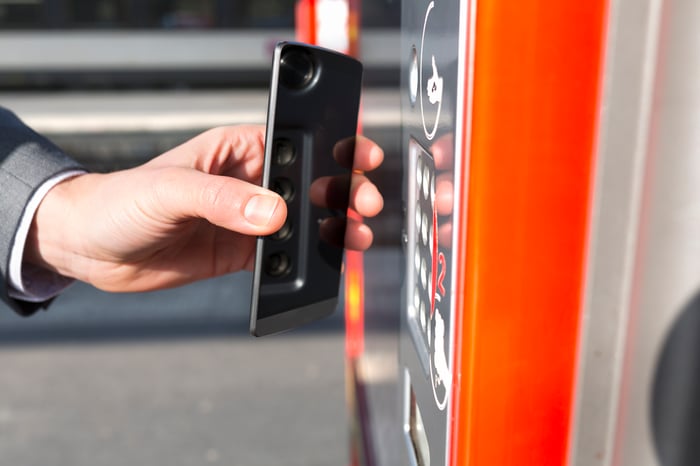 3. Rebates and incentives as a percentage of gross volume

Mastercard provides rebates and incentives to its card-issuing customers, and the company strives to maintain a balance between incentivizing volume and cutting into revenue. Rebates and incentives aren't expenses; rather, they reduce gross revenue to the net revenue recorded in the income statement.

This is a healthy relationship, revealing that the company has enjoyed modest leverage from its rebates and incentives versus the prior year. The leverage is also partly due to the growing importance of Mastercard's "other revenues," which rely less on volume concessions than the card transaction business.

"Other revenues" are wide ranging and include consulting, data analytics services, loyalty and rewards program fees, safety and security fees related to fraud prevention, automated clearinghouse (ACH) services provided to banks, and services provided to prepaid card issuers. In 2018 so far, "other revenues" have increased by 17.5% to $2.35 billion in comparison to the prior-year period.

Mastercard's management often discusses an informal spend category called "strategic initiatives," which refers to its serial card partnerships that help expand volume, the development of new technologies in both its traditional card businesses and the evolving digital payments space, and mergers and acquisitions.

Thus, strategic initiatives can refer to acquisitions such as Mastercard's $929 million purchase of ATM switching-platform operator VocaLink in April 2017. VocaLink enables near real-time ACH transactions between banks; you can read more about this important addition to Mastercard's services arsenal in an article by my Fool.com colleague Matthew Cochrane.

Yet strategic initiatives in Mastercard management's view also constitute the expenses spread over operating areas like research and development and marketing -- i.e., those with a direct impact on revenue expansion.

Now, Mastercard doesn't break out the specific number each quarter that falls under strategic initiatives. But notably, management has attributed nearly the entire rise in year-over-year operating expense in the last few quarters to this area.

In its third-quarter earnings release, for example, Mastercard stated that after the removal of certain items for comparability, underlying operating expenses "grew at 10%, primarily related to our continued investments in strategic initiatives."

During Mastercard's third-quarter earnings conference call, CEO Ajay Banga described the increase as primarily relating to personnel expenses and the expense of new product and platform rollouts. He also observed that such spends are discretionary and that they can be "dialed up or dialed down" as circumstances warrant.

Essentially, the company is signaling to investors that its rise in operating expenses, while tied marginally to higher revenue, is currently being propelled by discretionary investment. To date in 2018, reported operating expenses (after the removal of a special current-year item related to litigation settlements) have outpaced the prior year by 16%, while the company's top line has expanded by 20%.

As long as operating expenses, driven by strategic initiatives, remain at an expansion rate that is at or below revenue growth, investors should probably be satisfied. This relationship bears watching throughout 2019; as long as it stays right-side up, investors will have near-term proof that the company is obtaining a favorable yield out of its growth-oriented investments.