However, tourists have started to return, the stock market surged in 2017, and economic growth has accelerated. As a result, well-heeled shoppers have opened up their wallets again. This has driven a return to consistent sales growth for Saks Fifth Avenue and Neiman Marcus. Unfortunately, that hasn't translated into strong bottom-line results so far. 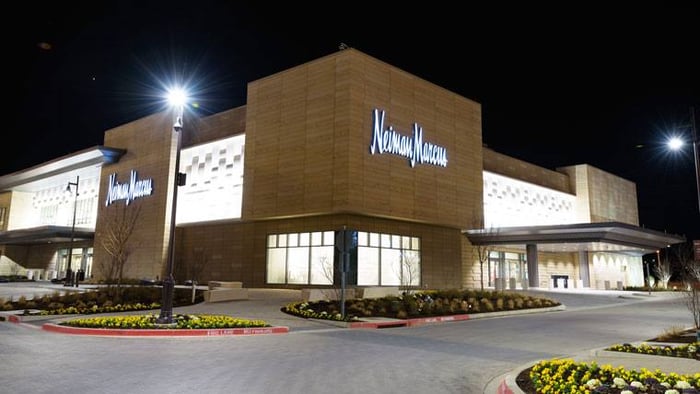 During 2018, Saks and Neiman Marcus have started to face tougher year-over-year comparisons as they lap their return to comp sales gains last year. Nevertheless, both chains continue to deliver sales growth, as revealed in their recently released earnings reports.

On Wednesday, Hudson's Bay reported that comparable-store sales surged 7.3% at Saks Fifth Avenue in the third quarter. This built on the strong performances it logged in the first and second quarters, when comp sales rose 6% and 6.7%, respectively. These excellent sales trends are particularly impressive because the Saks flagship store in Manhattan (which drives a significant proportion of the chain's sales) has been under construction this year.

Neiman Marcus followed on Thursday, reporting that comp sales rose 2.8% last quarter. While that represents a slowdown compared to the 4.9% increase Neiman Marcus logged during the fiscal year that ended in July, it's still a perfectly solid result given that the retailer is now facing tougher year-over-year comparisons.

Earnings results leave much to be desired

While Saks Fifth Avenue has been posting stellar sales growth lately -- and Neiman Marcus' sales performance has been perfectly respectable, too -- neither Neiman Marcus nor Hudson's Bay (Saks' parent company) has been prospering.

Adjusted EBITDA totaled $477.1 million at Neiman Marcus in fiscal 2018, for an adjusted EBITDA margin of 9.7%. However, after accounting for the cost of capital investments and interest on the company's massive debt load -- which threatens to force it into bankruptcy -- the company remained firmly in the red on a pretax basis. Neiman Marcus' comp sales gain last quarter drove only a modest margin improvement.

It's harder to decipher Saks Fifth Avenue's profitability, because Hudson's Bay also owns Lord & Taylor and Saks OFF 5TH, as well as its namesake Hudson's Bay chain in Canada. Year to date, the company's adjusted EBITDA margin is just 2.3%, up from around 0.7% a year earlier. Adjusted EBITDA should be significantly higher in the fourth quarter, bringing up the full-year average, but Hudson's Bay's full-year EBITDA margin will still be far worse than that of Neiman Marcus. To be fair, part of the difference stems from Hudson's Bay's complicated structure, which includes multiple real estate joint ventures. This reduces the company's interest expense but leads to higher rent expense. But even excluding the additional rent Hudson's Bay pays, Neiman Marcus' adjusted EBITDA margin would still be higher.

It's pretty clear that the struggling Lord & Taylor business and the Saks OFF 5TH off-price chain are weighing on Hudson's Bay's profitability. Yet Saks Fifth Avenue is the largest of Hudson's Bay's chains by sales. If it were extremely profitable, the company as a whole would be reporting stronger results.

Can Neiman Marcus and Saks Fifth Avenue live up to their potential?

Both luxury department store chains have returned to solid sales growth, but they are benefiting from extremely favorable economic conditions. In the long run, Saks and Neiman Marcus must be able to deliver higher profits even with weaker economic growth.

At the moment, Saks Fifth Avenue's prospects look brighter. Not only is it delivering stronger comp sales growth than its rival, but it is set to benefit next year from the completion of renovations at its flagship store. The new management team at Hudson's Bay has also been moving to simplify the business and improve operations.

Nevertheless, Saks Fifth Avenue has a lot of work left to get profitability to an acceptable level -- as does Neiman Marcus. Time is of the essence, because the recent rate of GDP growth probably can't be sustained for very long.