Market turbulence has thrown many stocks for a loop, but one company that some fear could face fundamental challenges in a down market is FactSet Research Systems (NYSE: FDS). FactSet relies on a healthy Wall Street, because many of the investment companies and professionals that use its data and information services are best able to remain loyal clients when times are good.

Coming into Tuesday's fiscal first-quarter financial report, FactSet shareholders were optimistic that the financial information specialist would be able to deliver solid results. FactSet made good on that promise, but even that wasn't enough to allay concerns completely about the uncertain future for the financial markets. 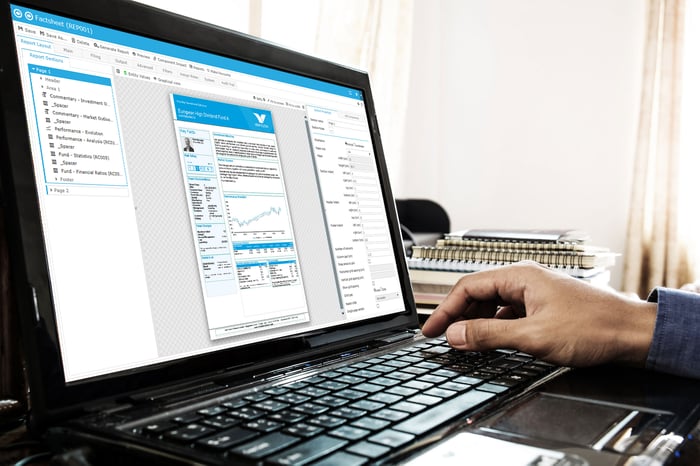 FactSet's fiscal first-quarter results were consistent with what the company's been able to accomplish in the recent past. Revenue of $351.6 million was up nearly 7% from year-earlier levels, inching slightly above what most of those following the stock had expected to see. Adjusted net income of $91.3 million was 13% higher than the year-earlier figure, and adjusted earnings of $2.35 per share compared favorably to the consensus forecast among investors for $2.29 per share.

Fundamentally, many of FactSet's numbers looked strong. Organic sales were up more than 6%, accelerating from the pace it set last quarter, as the company reported strong demand for wealth management solutions as well and content and technology solutions. Annual subscription value hit $1.42 billion when you include professional services, higher by roughly $80 million from year-earlier levels, or roughly 6%.

As we saw last quarter, the business that FactSet does with sell-side investment clients saw faster growth than corresponding buy-side clients, with sell-side growth coming in at close to 9% compared to less than 6% for buy-side. Even so, FactSet gets more than five-sixths of its annual subscription value from investment companies on the buy side of the business. FactSet's domestic business slightly outpaced its international segment, but nearly all of the disparity came from adverse foreign-currency impacts.

Client counts continued to rise, with FactSet combing just shy of the 5,300 mark, up roughly 3% just since its last quarterly report. Wealth management business has sent user counts soaring to more than 115,000, up more than 23,000 in the past three months. Retention rates stayed relatively constant in the 90% to 95% range depending on whether you measure by client counts or the annual subscription value they represent.

CEO Phil Snow expressed his excitement about the way things have gone lately. "Our strategy to provide open and flexible solutions," Snow said, "positions us well for another successful year of growth." The CEO also pointed to demand for data and technology offerings as important to FactSet's future.

FactSet's also optimistic about the future. As CFO Helen Shan put it, "We believe our expanding suite of solutions allows us to further penetrate the market and take market share."

In that light, it was a bit disappointing that FactSet chose not to make any changes to fiscal 2019 guidance. The company still sees sales coming in between $1.41 billion and $1.45 billion, and it's planning on a $75 million to $90 million boost to organic annual subscription value and professional services revenue. Earnings of $9.45 to $9.65 per share on an adjusted basis is also consistent with past projections. Given the outperformance during the first quarter of the fiscal year, the failure to raise guidance suggests reluctance on FactSet's behalf that it will fully overcome the headwinds that have appeared in the market during the past month or two.

FactSet shareholders weren't content with that forecast, and the stock fell more than 4% on Tuesday following the morning report. Even though the financial services company has held up well thus far, investors seem convinced that it'll take a sizable hit if a bear market takes hold.