Wednesday saw a rough session on Wall Street, as the long-awaited decision from the Federal Reserve on interest rates apparently wasn't what market participants wanted to hear. After having been up sharply early in the session, the Dow Jones Industrial Average plunged as much as 500 points following the central bank's decision to raise short-term rates by another quarter of a percentage point, and other stock indexes generally followed suit. Bad news from several well-known companies also contributed to the downbeat mood. FedEx (NYSE:FDX), Allergan (NYSE:AGN), and FTS International (NYSE:FTSI) were among the worst performers on the day. Here's why they did so poorly.

Shares of FedEx finished lower by 12% after the delivery specialist reported its fiscal second-quarter financial results. FedEx was able to produce solid growth during the period, including a $1.5 billion jump in revenue to $17.8 billion and a boost of nearly 25% in earnings per share. Yet despite the record-setting holiday season, FedEx dramatically cut its guidance for the remainder of the fiscal year, including a roughly 7% to 10% reduction in expected earnings per share on an adjusted basis. Comments during the quarterly conference call pointed to trade issues, Brexit, and other pressures on FedEx, and it could take time for the company to regain its past momentum. 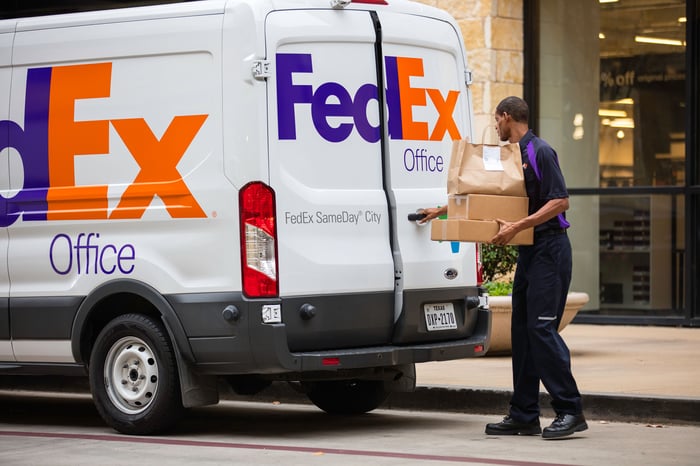 Allergan stock fell 7% in the wake of the biopharmaceutical company's decision to take some of its products off the market in Europe. Allergan said that it had suspended sales of textured breast implants and tissue expanders in European markets, responding to a recall request from France's regulatory body following the expiration of the CE Mark for those products. Despite assurances that patients who already have the implants shouldn't seek to have them removed, Allergan is still taking the regulatory request seriously, yet the company also noted that the U.S. doesn't require the mark and so sales there won't be affected. Some investors already saw Allergan's stock as cheap, so today's decline gives would-be buyers an even better opportunity.

Finally, FTS International shares sank 14%. Analysts at Credit Suisse downgraded the oil-field services provider's stock from outperform to neutral, reducing their price target by nearly half from $15 per share to $8. The primary motivation for the move was the big drop in crude oil prices recently, as the decline below $50 per barrel has implications for rig counts and production decisions across the industry. With FTS relying on its production partners to use its services, the oil services company will remain under pressure until energy prices start to rebound.