Entering 2018, Tencent Holding (OTC:TCEHY) was one of the hottest internet companies in the world. The Chinese social media giant was delivering robust growth rates, and the stock was hitting new highs.

However, new restrictions by the Chinese government on the gaming industry have presented challenges for Tencent's gaming business, which makes up about a third of the company's total revenue. The stock is down 25% over the last six months as Tencent has been unable to monetize its games while it waits for the government to complete a review of certain titles on the market. The government is trying to crack down on excessive violence in games, among other things.

Is this a buying opportunity, or a red flag? Let's take a look. 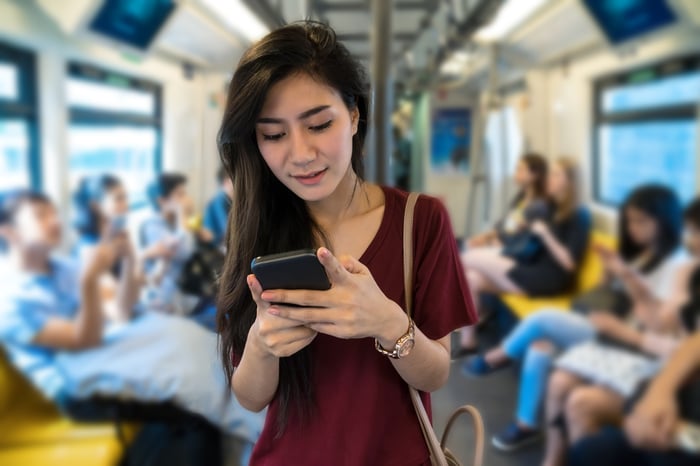 Time to put the games away

The Chinese government put a halt on new game approvals in March, which has prevented Tencent from getting new titles released. More importantly, it has kept the company from generating money from sales of in-game content for titles under review by the committee. After game sales surged 38% in 2017, gaming revenue declined 4% year over year in the third quarter.

This isn't bad as it looks on the surface. In my view, the formation of China's Online Games Ethics Committee highlights the growth opportunity of China's gaming industry. Gaming is very embedded in Asian culture. It is much more a part of everyday life for Chinese youth than it is in the United States. However, gaming has gotten so popular in China that there are rising concerns about addiction and other health issues, which has prompted the government to step in.

Tencent has already imposed restrictions on participation in select games, including a limit of one hour of playing time a day. The company has also imposed a gaming ban during night hours.

Growth in gaming will resume

Despite the government's involvement, gaming is not going away in China. Esports has already been approved as an official medal event for the Asian Games in 2022.

In Tencent's second-quarter earnings report, management's comments reveal the expectation that gaming will continue to grow over the long term: "Looking forward, we are seeking to reinvigorate our mobile game revenue growth, via initiatives including deepening engagement with our existing major titles, monetizing the proven popularity of tactical tournament games, launching a broader range of games ... and increasing contributions from publishing our China-developed games internationally."

Analysts expect the ethics committee to begin wrapping up its review in the coming months. Game approvals are expected to resume during 2019, and Tencent should see an acceleration in its gaming revenue once the committee's review is complete.

One analyst with UBS Group expects the gaming industry in China to grow to three times its current size by 2030. Tencent distributes some of the most played games in the industry and is the largest video game company in the world based on game sales. As esports and casual gaming continue to grow in popularity, Tencent is in a perfect position to benefit.

Other segments are growing fast

In total, Tencent's revenue increased 24% in the last quarter, while net profit grew 30%. The company has an enviable position as the leader in China across online games, social media, video streaming, news, music, and mobile. The combined user base of Tencent's Weixin and WeChat social media networks is 1.082 billion.

Tencent should be able to grow over the long term because of its network effect competitive advantage. That is, the more people that use its services, the more valuable it becomes for others to join. Because of its massive reach, content providers see Tencent as a go-to distributor for their content. For example, top U.S.-based game makers like Activision Blizzard and Take-Two Interactive have partnered with Tencent to make their best-selling titles available to WeChat users.

Additionally, Tencent could have a significant opportunity to sell its games outside of China, which could lessen the impact of any future restrictions on its gaming business. The company has benefited from the worldwide popularity of Fortnite and League of Legends, but Tencent has other games not known to Western audiences. The company recently launched one of its most popular games (Arena of Valor) for Nintendo Switch, and the game achieved 1 million downloads for the console.

The uncertainty caused by the halt in game approvals in China is providing investors with an opportunity to buy shares of one of the largest social media companies in the world at a discount. The stock currently trades for a trailing PE of 28, which is not a lot to pay for a company that is still growing revenue and profits more than 20% per year.