A string of high-profile deals could provide additional upside for the tech giant.

In assessing the top turnaround stories of the past several years, tech giant Microsoft ( MSFT -0.18% ) would certainly be in the running. The addition of cloud computing and its pivot from software licensing to a subscription model for its ubiquitous Office software have catapulted the company forward, more than doubling its stock price in the past three years alone, far exceeding the 42% gains of the S&P 500.

Microsoft is scheduled to report its financial results of its just-completed fiscal second quarter after the market close on Wednesday, Jan. 30. Let's take a look at the company's recent quarter, some high-profile announcements, and what investors can expect when Microsoft reports earnings. 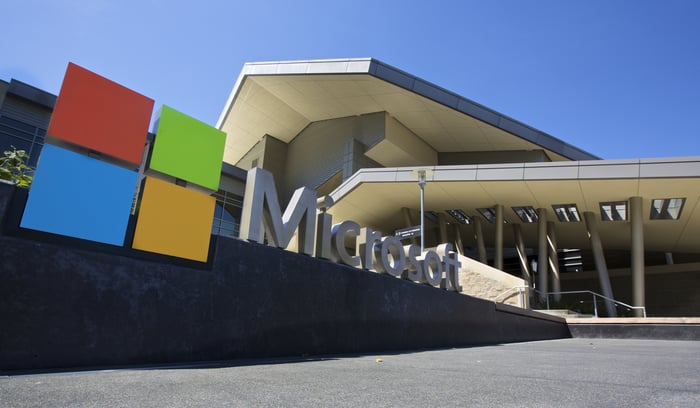 For the first quarter, Microsoft reported revenue of $29 billion, up 19% year over year, and easily topping both analysts' consensus estimates and the high end of management's forecast. This led to net income of $8.8 billion and diluted earnings per share of $1.14, which also beat expectations.

Microsoft produced double-digit growth across each of its major business segments, with the best performance coming from its intelligent cloud business, which increased 24% year over year to $8.6 billion. If this rate of growth continues, cloud computing could soon overtake both the personal computing segment and the productivity and business processes segment as Microsoft's top revenue producer. Azure, the company's cloud platform, was the highlight, growing 76% year over year.

There were notable performances from the company's other business units as well. Commercial sales from Office climbed 36% year over year, while revenue from LinkedIn -- the company's business social networking platform -- grew 33% compared with the prior-year quarter. Engagement on the site hit record levels, up 34%. Gaming was another bright spot, up 34%, as Xbox software and services continue to draw gamers.

Microsoft has announced a number of high-profile cloud computing wins since the dawn of 2019. The company announced in early January that it had signed a massive seven-year deal with Walgreens Boots Alliance to become its strategic cloud provider. Walgreens plans to move the majority of its information technology infrastructure to Microsoft Azure.

While these deals happened after the end of the quarter, they certainly illustrate the trajectory of Microsoft's cloud computing business and could well play into its forward-looking guidance.

For its fiscal second quarter, Microsoft is anticipating revenue in a range of $31.9 billion and $32.7 billion, which would represent year-over-year growth of between 10% and 13%. The company is also forecasting cost of goods sold of about $12.3 billion, and operating expenses of about $9.85 billion. The company didn't provide earnings-per-share estimates.

To put that into perspective of the market's overall sentiment toward the company, we can look to Wall Street's expectations, though we don't want to get caught up in its short-term mind-set. Analysts' consensus estimates are calling for revenue of $32.49 billion, an increase of 12.4% year over year and just above the midpoint of Microsoft's guidance. Analysts are also anticipating earnings per share of $1.09, an increase of 13.5% compared with the prior-year quarter.

If recent announcements are any indication, Microsoft is headed for another expectation-beating quarter.