After a solid quarter, the online marketplace will now pay shareholders as they wait for long-term growth initiatives to play out. Here's what you need to know.

eBay (EBAY 2.93%) released fourth-quarter 2018 results on Jan. 29 after the market closed, detailing solid top- and bottom-line growth, its first-ever dividend, and progress as it shifts its focus to capturing longer-term opportunities in both advertising and payments.

To be fair, eBay has faced pressure from multiple activist investors in recent days, so the timing of its boosted capital returns seems to be no coincidence. Nonetheless, with shares up modestly in after-hours trading as of this writing, let's dig deeper for a better idea of how eBay ended the year and what shareholders should be watching. 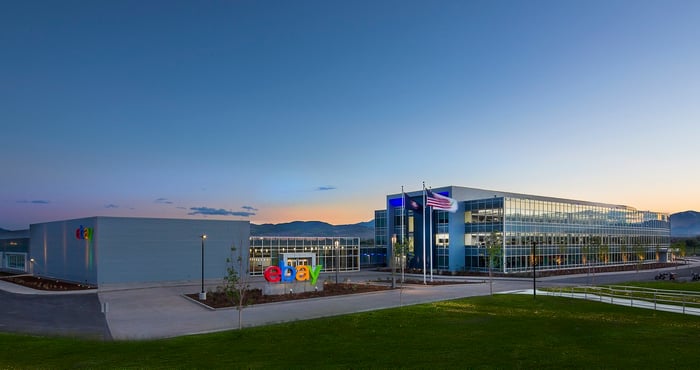 We delivered record earnings for the fourth quarter and full year 2018. In 2019, our focus will be on further improvements to the eBay user experience, while pursuing significant long-term growth opportunities in advertising and payments. We are confident in the strength of our business and future growth prospects, as demonstrated by our decision to institute eBay's first-ever dividend and increase our share repurchase program.

For the first quarter of 2019, eBay expects revenue between $2.55 billion and $2.60 billion, assuming organic currency-neutral growth of 0% to 2%. On the bottom line, that should translate to adjusted (non-GAAP) earnings per share of $0.62 to $0.64. For perspective, and though we don't usually pay close attention to Wall Street's demands, consensus estimates had predicted lower first-quarter earnings of $0.61 per share on higher revenue of $2.66 billion.

As such, some bears will undoubtedly balk at eBay's apparent struggle in finding sustained top-line growth. Bullish investors can take some solace, however, in knowing they'll now collect a dividend each quarter for their patience as eBay works on its budding advertising and payments initiatives. It also helps that eBay is successfully bolstering its earnings in the meantime -- albeit to some extent thanks to its ambitious share repurchase plans.