Candy conglomerate The Hershey Company (NYSE:HSY) wrapped up 2018 with moderate sales growth, as revealed in its fourth-quarter 2018 earnings report released on Thursday before the markets opened. Alongside earnings, the chocolate maker also issued its outlook for 2019, which calls for a slightly slower rate of revenue expansion versus the prior year.

Below, let's walk through big-picture numbers and then zero in on the quarter's details, which provide some context for this year's earnings outlook. Note that all comparative numbers in this article are presented against the prior-year quarter (the fourth quarter of 2017). 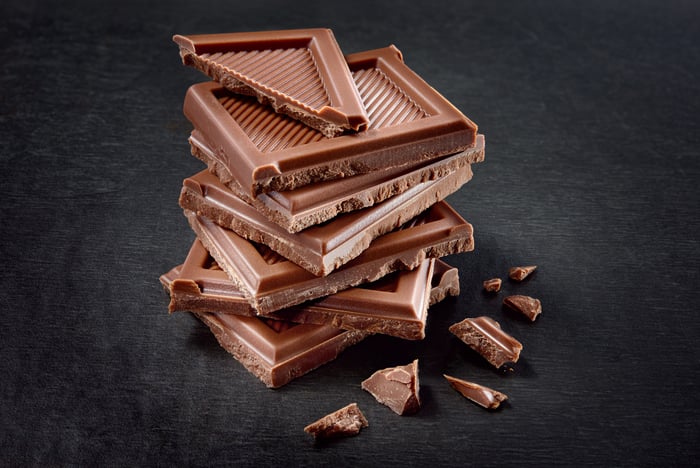 In a dynamic and highly competitive operating environment, in 2018, we grew our business and delivered on our financial commitment, while strategically investing for the future. In our U.S. core confection business, we invested in new brand positioning and launched new campaigns for our two largest brands, Reese's and Hershey's. ... We also expanded our portfolio to capture incremental consumer occasions with complementary acquisitions of Amplify and Pirate's brands. These two high-growth, high-margin, better-for-use snacking asset are a great fit with our Hershey portfolio. They're performing well in the marketplace and they're on track to deliver against our goals.

Hershey's full-year 2019 outlook calls for 1%-3% revenue growth, which will trail its 3.7% revenue advance booked in 2018. This is due to several factors. First, the company will lap both of its snacking acquisitions during the 2019 year, effectively losing the comparative benefit of the new revenue.

In addition, Hersheys is in the process of implementing price increases during 2019 that will have an aggregate positive effect of 2.5%. However, this may result in temporarily lower volume in some of the company's brands, consequently dampening revenue.

Finally, the organization continues to implement a stock-keeping unit (SKU) rationalization program that it started last spring. This involves culling lower performing product variants in favor of better selling, higher-margin items within each brand family. Similar to the price-increase initiative, the long-term effect should be positive on gross margin, yet the exercise might result in lower volumes at the outset.

Hershey will have to exceed the high end of its revenue guidance by nearly 1 percentage point to expand at a faster rate this year than in 2018. As the company invests for future growth, shareholders shouldn't expect the bottom line to outpace revenue: Earnings are anticipated to be similarly muted in 2019. The company expects diluted earnings per share (EPS) of between $5.50 and $5.66, which, at the midpoint, will exactly match the $5.58 of diluted EPS Hershey's earned in 2018.

Check out the latest The Hershey Company earnings call transcript.